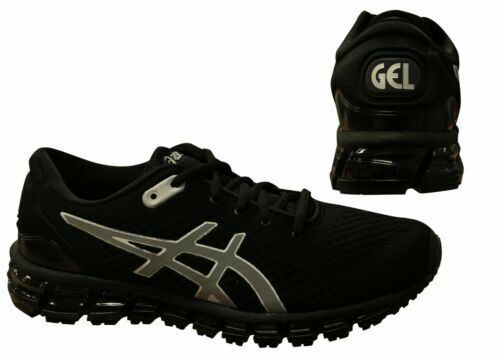 The ASICS Gel Quantum 360 sneakers evoke a modern street style. There are overlays on a mesh-patterned upper and the 360-degrees Gel Quantum technology circulates throughout the midsole for long lasting comfort.

How does the Gel work?

Thanks to the Gel’s 360 degrees cushioning the sole, it allows the effect of impacts on the ground to decrease while delivering a smooth transition from heel to toe.

The ASICS Gel Quantum 360 shoes deliver responsive cushioning both upon impact while also providing solid push-offs. This is due to the cushioning Technology of ASICS signature Gel, as well as support from the Trusstic system and adaptable relocation of the IGS system.

The soft mesh upper of these ASICS Gel Quantum 360 shoes have a lace-up system attached which conforms to the foot for a customisable and secure lockdown. The padded collar and tongue both also help to avoid heel slippage by ensuring the foot stays locked in place during use. This reliable running shoe is a great companion for a run, but also

Style and Colours of the Gel Quantum 360

Comfortable, with extra cushioning, and enhanced stability, if you are wearing these, your feet will thank you. The semi translucent sole of the ASICs Gel Quantum 360 also gives this shoe a distinct and unique look. Slightly chunkier than other ASICs sneakers, those who want their shoes to stand out should consider this option. It also comes in both standard colours as well as brighter shades such as an eye-catching all-out red.

There are also several different models of this line, including the Gel quantum 360 Jacquard, Gel Quantum 360 6 and Gel Quantum 360 Tokyo Reborn. All of these have slight design variations but all feature the signature 360 Gel cushioning in the sole.

If you’ve never worn Gel shoes before, but you’re keen to see what the hype is all about, check out the range of ASICS Gel Quantum 360 sneakers available on eBay today.