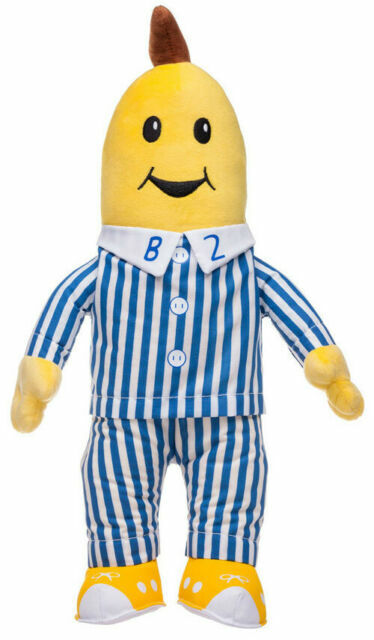 For more than two decades, Bananas in Pyjamas have been one of Australias most-loved childrens shows, having originated in a Playschool song from the 1960s. The song became the theme tune to the wildly popular series and is known by Australians of all ages. Whether they love B1 or B2 (or both!), treat your kids to their favourite Bananas in Pyjamas doll and character toys, or dress up at their next party with a range of Bananas in Pyjamas men’s costumes.

Want to surprise your kids at their next birthday party? Why not dress up as B1 or B2 in fun Bananas in Pyjamas mens costumes? They come complete with a blue-and-white striped top and tousers as worn by the bananas in the TV programme, as well as shoe covers and a banana-shaped headpiece.

Other Bananas in Pyjamas Merchandise

In addition to plush toys and Bananas in Pyjamas costumes, you can also find book and audio sets from the series, cake topper figurines, and toddler rattling balls. While some are licensed Bananas in Pyjamas products, others are unbranded or even home creations that have been lovingly knitted by hand.

Cant decide which of the Playschool characters is your favourite? Then, purchase a Playschool soft toy set with not only B1 and B2, but also Humpty Dumpty, Little Ted, and Lulu Bear. These plush toy sets are a great addition to your nursery and will keep your young ones entertained for hours.