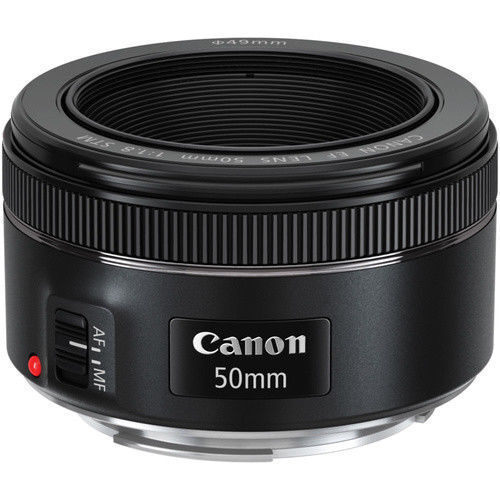 The 50mm lens, often referred to as the standard lens, is one of the cornerstones of a photographer’s kit. Canon makes a wide range of 50mm lenses with varying features and aperture sizes to suit different photographic needs.

The 50mm prime lens is often recommended by photographers as the first lens to buy for your DSLR. Prime lenses can have a much wider aperture than regular kit lenses, making it much easier to shoot in low light or play with shallow depth of field. The middle-of-the-road focal length also produces an image similar to what your eye sees, making them very versatile. Finally, the fixed length also acts as a training aid, forcing you to walk around to achieve your ideal framing instead of relying on zooming in and out.

Canon’s most famous 50mm lens is their f/1.8 50mm prime lens. Its popularity won it the nickname among photographers of “Nifty Fifty”, a label that has now also stuck to similar lenses from other manufacturers. However, it is not the only 50mm prime lens that Canon currently produces. The company’s other 50mm offerings include their f/1.4 and f/1.2L lenses for even faster speed and shorter depth of field. At the other end of the spectrum, the 50mm f/2.5 produces sharp macro images. While not currently produced, Canon has also manufactured a premium f/1.0 lens for professional users. Their 50mm lenses with the EF mount are compatible with full-frame and APS-C Canon cameras.

Many recent models in Canon’s lineup are STM lenses. Currently the only Canon STM 50mm lens is the 50mm f/1.8, but the company also produces STM models at other sizes including the STM 40mm f/2.8. The STM name refers to the stepping motor that powers the autofocus lens. Step motors provide smoother and quieter focusing that won’t drown out the background noise when you are shooting video. Some other 50mm prime lenses such as the EF 50mm f/1.4 feature USM technology instead. USM stands for ultrasonic motor, which converts ultrasonic vibrations into rotational force for extremely fast automatic focusing. Canon 50mm manual focus camera lenses lack automatic focusing entirely and are typically older models.

Canon does not only produce prime lenses with a 50mm focal length. In fact, their current prime lenses range from the compact EF-M 22mm f/2 STM lens all the way up to the extra-long EF 135mm F/2L USM. Other popular Canon prime lenses include the 85mm f/1.8 telephoto lens for distance shooting and the versatile 40mm f/2.8 “pancake”.