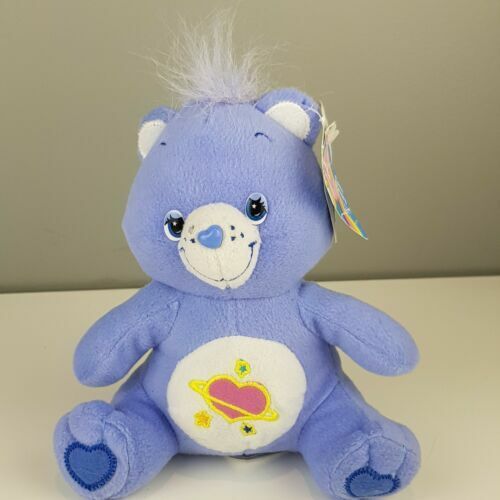 Care bears are multicoloured bears of which the origination can be traced back to 1981, around this time Care Bears were featured upon greeting cards and later developed into toys and then featuring on television and films.

Which were the original Care Bears?

What type of Care Bears are available?

On eBay you can find a wide range of different types of Care Bear, whether that is a vintage traditional stuffed animal style, a plush Care Bear, posable Care Bears, miniature Care Bear figures and everything else such as care bear toys, mugs and accessories. With a wide range of brands being associated with Care Bear you can shop via specific brands on eBay, with options such as Kenner, Hasbro, McDonalds and Jakks Pacific.

How can I tell if a Care Bear is collectible?

Each Care Bear has a patch on the centre of its stomach which dictates its name, from this you can assess what year the care bear was made and whether it was an original Care Bear. The most difficult Care Bears to find are prize bears, and exclusive UK Limited Edition bears.

Care Bears are great as presents for nostalgic tendencies, you can gift these to someone who grew up in the time of the Care Bear, alternatively give a Care Bear to your child and see the dream live on. With a huge selection of types of Care Bear products, the range doesnt end in plush toys ,across eBay you can find an assortment of Care Bear material, such as backpacks, birthday cards, clothes and even Care Bears nursery decor .