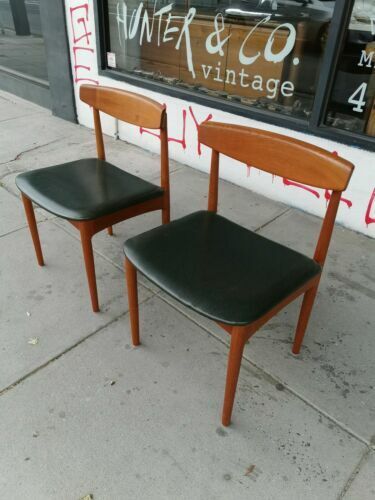 Eames is one of the world’s most recognisable names in chairs. Mid-century Eames designs can still be found in stylish dining rooms to this day.

Husband and wife team Charles and Ray Eames were two of the world’s most influential architects and furniture designers during the twentieth century. As designers, the pair took full advantage of mass production technology. Their motto was ‘the best for the most for the least’, signalling their aim to put affordable design into ordinary homes. They are particularly well-known for their moulded plywood and plastic designs like their most famous creation, the Eames Lounge and Ottoman.

While Ray and Charles Eames designed several dining chairs, the most influential was the Eames Plastic Chair. Designed by Charles Eames for a design competition in 1948, this was actually a modular design with several styles of seat and leg to choose from. The armless Plastic Side Chair in particular inspired a legion of imitators. Most retro Eames dining chairs today are based on either the DSW or the DSR model of the Eames Plastic Chair. The DSW version has wooden legs with metal trusses, while the DSR features the Eames ‘Eiffel Tower’ leg design. However, these are far from the only Eames dining chair designs and styles like the DCM are also popular today.

Eames furniture today is manufactured by two licensed manufacturers: Herman Miller and Vitra. However, the original Eames pieces have inspired a huge range of modern designers to create furniture that is more or less faithful to them at a range of price points. Many of these modern designers have innovated in terms of materials and colours, creating new vinyl retro dining room chairs and leather retro dining room chairs.

Ray and Charles Eames designed a lot more furniture than just dining chairs. The Lounge Chair and Ottoman remains one of their most recognisable pieces, to the point that one of them is in the permanent collection of New York’s Museum of Modern Art and has been updated or outright copied by many different furniture companies. Other iconic Eames chairs include the elegantly curved La Chaise and the black leather, four-wheeled Lobby Chair.