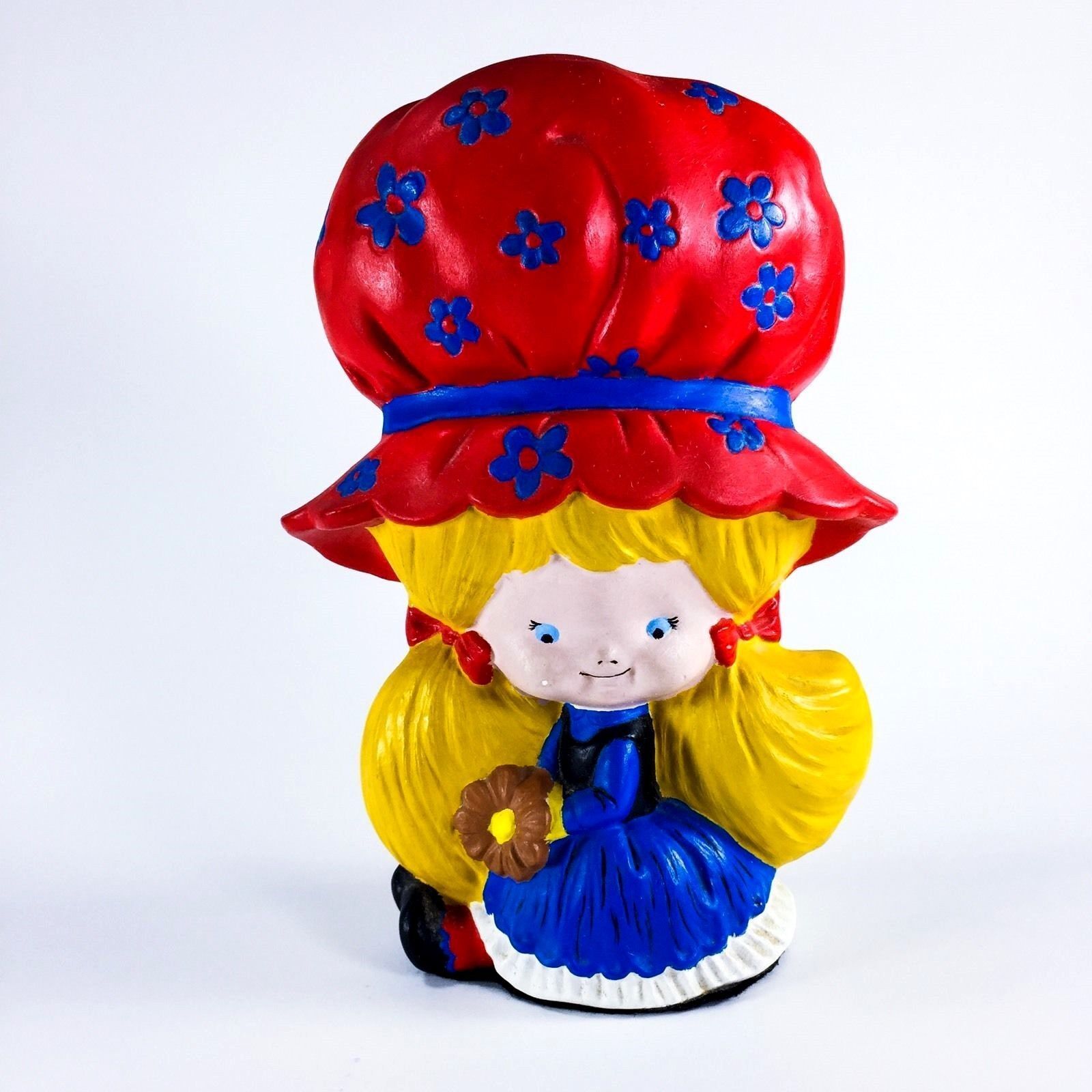 Holly Hobbies traditional outfit consists of a trimmed blue patchwork dress. The blue print sitting over a white background matches her light brown hair and brown eyes, while her pantaloons and bonnet are neatly coordinated in blue calico print. Other Holly Hobbie dolls came with a blue calico-trimmed dress in pastel patchwork, coordinated with a matching bonnet. Matching pantaloons of blue circles sitting over a white background completed her outfit.

The Origins of Holly Hobbie Dolls

Holly Hobbie is an illustrator and American writer. Holly was born in 1944 as Denise Holly Ulinskas. In 1964 Denise married Douglas Hobbie. It was in the early 1970’s that Denise Hobbie began selling her distinctive artwork to American Greetings. This artwork consisted of a series of illustrations showing a cat-loving little girl wearing a rag dress and a giant bonnet. At first nameless, the series became hugely popular and her little girl soon became known as "Holly Hobbie." Knickerbocker Toys licensed the character of Holly Hobbie in 1974 for their line of rag dolls, which at that time had become a very popular companion for young American girls.

The Popularity of Holly Hobbie Dolls

People became very intrigued by Denise hobbies designs in the 1960’s, which featured a little girl dressed in a long patchwork dress. The little girl faced sideways, with her face obscured by a large bonnet. Perhaps it was the pose that created the desire to explore the expression hidden beneath that huge bonnet. Older women, in particular, were fascinated by this nostalgic theme, visualising their granddaughter hidden beneath that floppy headwear. The long dress coincided perfectly with the trendy look of the day––the country style, floaty, feminine dress with a small print in pastel shades.

Diana Hefner developed a range of porcelain Holly Hobbie dolls which stand 16 inches high, with each doll representing one of the four seasons. The first doll to be released represents the autumn season, which has the little girl clutching a flowering twig while wearing her now widely-famous patchwork dress and bonnet. Summer Holly was the next to be released, with the little girl holding the American flag while dressed in patriotic colours of red, white and blue. Winter Holly was dressed in red, and Spring Holly wore green. The cheeky grin and shy smile on these vintage dolls were delightful, as was the detailing on their costumes.