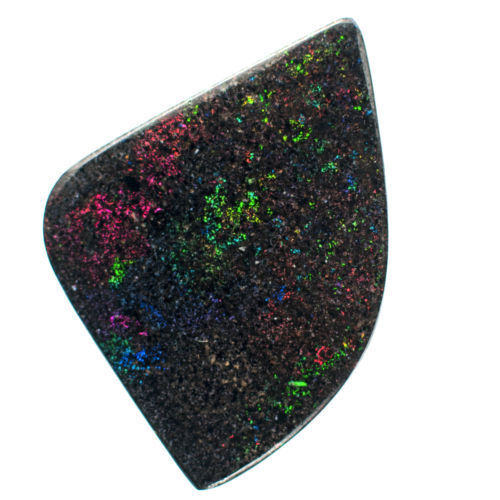 The national gemstone of Australia, opals are renowned for their fiery glow and multi-coloured hues. Although mined in other countries, such as Slovakia, Australia produces more than 97 per cent of the worlds opals. The birthstone of October and the gift traditionally given for the 14th year of marriage, opals suffered a bad reputation in the 19th century. Sir Walter Scotts novel Anne of Guerstein featured a heroine who died after a drop of holy water fell on her opal. After this, the stone became associated with bad luck, and sales plummeted by over 50 per cent. Thankfully, the discovery of stunning black opals in Australia overcame the misconception, and they are once again appreciated for the complex, tiny items of beauty they are.

Australian loose black opals are the most popular and well-known type. The overall body of them is black with the characteristic fiery flashes of colour for which opals are known. Many black opals have a backing on them known as potch, which serves to highlight the black colouring. Top-quality black opals can fetch an eye-watering $15,000 per carat, making them a very precious stone indeed. The vast majority of black opals are found in Lightning Ridge, a small town in the outback of New South Wales, which is primarily known for its opal industry. These types of opals tend to be cut and polished much thinner than other opals, as the colour band in them is quite thin.

Cabochon loose opals are cut and polished into oval-domed shapes. Cabochons can be cut high, medium or low. Low cabochons are almost flat in appearance. The cabochon shape is the most popular cut for opals, as it shows off the colours best. Also, opals are a relatively soft stone, and the lack of facets means theres less chance of chipping and damage. Ideally, opals should be set against a black or very dark opaque background to allow the colours to pop and be displayed to their full effect.

Its possible to buy rough loose opals, which are pieces of stone that have opal in them, but have not yet been cut and polished. Some arent worth the money and time to cut and polish, but are still very beautiful even in their raw state, and can look great displayed in jars, collections or even set into mosaics. Others, although rare, may have been overlooked and actually worth a lot more than initially thought. Rough loose opals tend to be the most cost-effective way of getting your hands on these stunning stones, and the colours and styles are myriad - from pretty milky pastels to strong bold reds and blues.

Shop for other loose opals and get decorative. Find loose opals from a variety of different regions and bring something new to your home. Simply select Afterpay as your payment method at checkout.