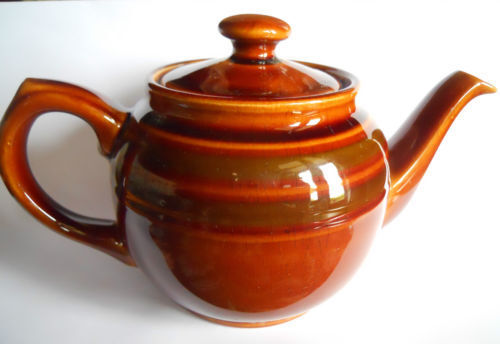 What is the Brown Betty Teapot?

Brown Bettys were a round teapot with a brown glaze, known as a Rockingham glaze, and were a specialty of the Sadler company. Early versions consisted of red terracotta discovered in the Stoke-on-Trent area in 1695. Its ability to retain heat made it a popular material for making teapots, and they originally had a tall shape before transforming into their round appearance. During the Victorian Era, Brown Betty teapots gained widespread popularity, with their design allowing the tea leaves to swirl as you poured water into the pot, therefore, reducing the bitterness and resulting in what was considered a superior brew.

What is the Sophie Chintz Teapot?

This vibrant yellow teapot pattern dates back to the early 20th century and named after James Sadlers sister Sophie. It features beautifully detailed flowers and an elegant shape with a gold handle, lid top and base. It is one of the most popular vintage original Sadler pottery and porcelain items available amongst collectors today.

How Do I Know If a Sadler Teapot is An Original?

Sadler teapots made between 1899 and 1937 have an impression mark that reads "ENGLAND JSSB," while those made after 1937 often feature the marking "SADLER BURSLEM ENGLAND." Burslem refers to the location of Sadlers factory in the heart of the Stoke-on-Trent ceramic industry.

Which Novelty Sadler Teapots Are Available?

From around the 1930s, Sadler teapot pottery and porcelain items began to include novelty shapes, such as the iconic racing car teapot and the "Old Bill" tank. Many of the pre-war racing car teapots made by Sadler had the marking "Made in England," and feature the number 820236 on the base with a license plate of OKT42. Sadler also created a racing car teapot with the cartoon characters of famed British illustrator Mabel Lucie Attwell.