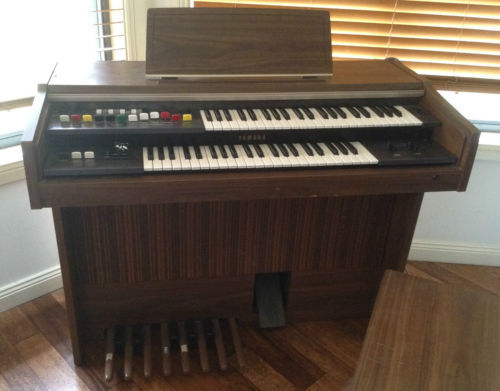 While organs are a specialised instrument, Yamaha continues to produce electric organs for home and concert use. Yamaha organs also have a long history, so there are plenty of vintage models to choose from.

While the organ is quite an uncommon instrument, it has an extremely large repertoire due to its centuries-long use in religious and secular music. The traditional pipe organ uses a keyboard to direct airflow through tuned vertical pipes, causing them to sound. Organs have at least two banks of keys and possibly more, allowing the player to cover a huge range of notes. However, pipe organs are extremely expensive and mechanically complex, not to mention enormous. Most organs sold today are electric organs. Invented in the early 20th century, these do away with the air-driven pipes in favour of electronic oscillators that produce the instrument’s sound. Modern electric organs are entirely digital. However, the design of multiple keyboards, pedals and stops remains the same, allowing electric organ players to play classical organ pieces.

Yamaha’s own organ business began in 1959 with the launch of the D-1 Electone electric organ, which featured a pair of 49-note keyboards and 13 pedals. Over time, Yamaha integrated more and more synthesiser technology into their electric organs, and by 1975 the lines were combined in the form of the GX-1. Later Yamaha organs, such as the Stagea series launched in 2004, continued to combine organ-like controls with synthesiser-like internals. However, while Yamaha electric organs like the ELS-02 remain in production, they are only sold in certain regions.

As well as electric organs, Yamaha also manufactures some other unusual keyboard instruments. Arrangement workstations and synthesisers provide creative musicians with an enormous range of sounds to draw upon, making them suitable for any style of music. Yamaha also sells celestas and keyboard glockenspiels, which use hammers to strike metal keys, as well as pianicas, which are handheld, keyboard-operated wind instruments. Of course, Yamaha also produces a wide selection of standard home keyboards ranging from entry-level student-oriented designs like the PSR-F51 to performance keyboard such as the PSR-EW400.

Yamaha also sells a range of