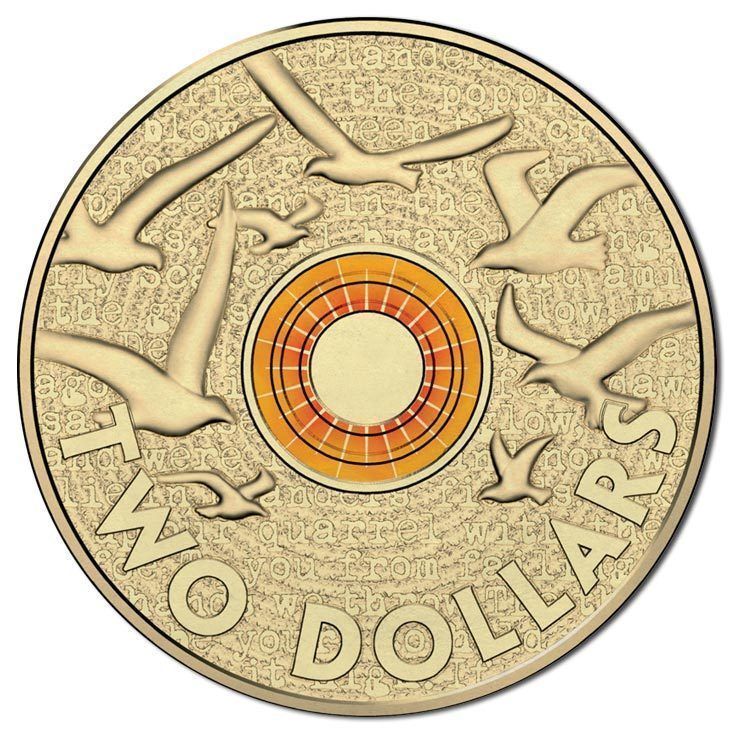 The Royal Australian Mint first issued two-dollar coins in 1988 and colourful commemorative versions since 2012. All $2 coins are circular and comprise of copper, aluminium, and nickel. The front (obverse) design of all Australian $2 coins features the current monarch.

Of particular interest to collectors of the standard two dollar coin are proof and uncirculated sets, and coins minted 1988 to 1999. The 1988 to 1989 coins were the only years the coins were imprints with HH, the artist’s initials. The reverse of the standard Australian two-dollar coin depicts a male Aboriginal Elder, native grasses and the stars of the Southern Cross.

The first coloured commemorative two dollar coin, minted in 2012, acknowledges Australias military and Anzac involvement. The reverse design is a red poppy over the wording "lest we forget", encircled with the word “Remembrance”. This design was also issued uncoloured. The 2014 Remembrance Day coin is a dove and olive branch encircled in green and surrounded by sun rays. In 2015, the 100-year anniversary of Anzac Cove inspired a design of a ring of poppies surrounding red striped circles. Also released in 2015 was a coin to remember the war poem “In Flanders Field”. This coin has images of larks flying around orange coloured rings. 2017’s commemoration is a blue-green-yellow mosaic depicting the peaceful decor of Australian War Memorial’s Hall of Memory.

The 2013 coin celebrates the sixtieth anniversary of the Coronation of Queen Elizabeth II. The reverse image is the coronation crown, St Edwards crown, surrounded by circles of purple stripes.

A 2016 uncoloured coin marks the fiftieth anniversary of decimal currency in Australia. The reverse image includes a picture of the Queen’s head, the crown and the wording “Commonwealth of Australia.”

A series of coins commemorate Australias participation in major sporting events, such as 2016 Olympic $2 coins and Paralympic coins. The Olympics set of five is in each of the Olympic ring colours, blue, black, red, yellow and green. At the centre of the image are a kangaroo and emu on both side of a star with the Olympic rings logo below and the different supports around the outside. The Paralympic coin features a multi-coloured circle and an image of a wheelchair athlete in motion.