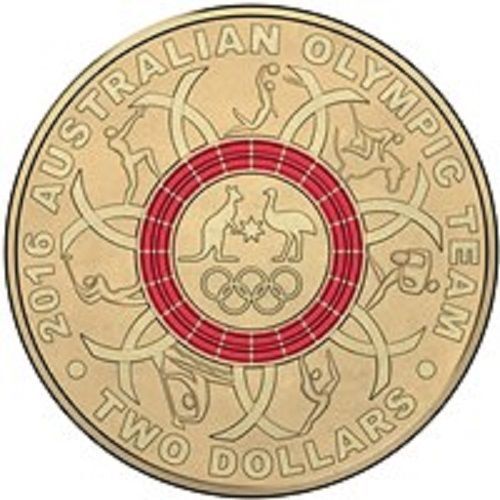 Australians have proudly represented their nation through various Olympic sports for over 120 years. In 2016, The Royal Australian Mint released a series of coloured commemorative $2 coins to coincide with the Rio Olympics. A separate multi-coloured $2 coin also issued to commemorate the Australian Paralympic team the same year. These limited edition 2016 Olympic $2 coins are legal tender and over 12 million coins went into general circulation in July and August that year. Uncirculated Olympic coins and full Olympic $2 Coin Sets are particularly popular with collectors.

In the full set of five Olympic 2 coins for the 2016 Rio Olympics, each individual coin features a different coloured circular ring in the Olympic colours - blue, black, red, yellow and green.

The Paralympic $2 coin for the 2016 Paralympics was the first multi-coloured $2 coin minted in Australia.

What is the Composition and History of the Standard $2 Coin in Australia?

Australian 2 dollar coins are late eighties babies, they first issued in 1988 as a more durable option to replace paper notes.