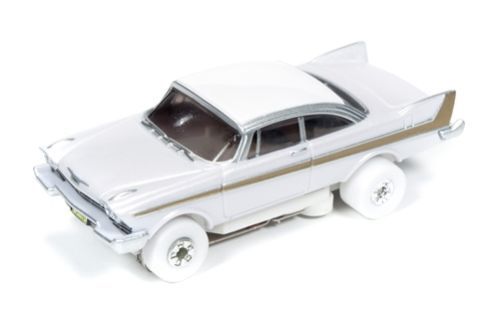 Introduced in 1971, AFX slot cars changed the racing habits of a generation of children. Where previous models had used 1:76 scale model cars, AFX introduced new vehicles at 1:64 scale. With more details and better performance, the new scale quickly took the market by storm, and soon all HO scale car followed suit to the 1:64 scale that AFX pioneered.

The bigger cars made a huge difference to slot car racing. Aurora, the maker of AFX, was able to put bigger motors in their cars giving them higher performance. Another innovation, Magna-Traction, used magnets to hold the cars on the track so they didnt go flying off so easily on the corners. Perhaps best of all, even though the cars were bigger they werent so much bigger that they couldnt use existing track and accessories.

Slot cars race on a plastic track with two slots running down the surface. Each slot is flanked by a pair of metal strips that carry the current to drive the cars. You dont steer the cars, the track does that, but the controller does let you adjust the power in the rails and how fast the cars go. To set it up, you lay out the track, plug in to a power point and drop the cars in the slots.

You can just collect the cars if thats all that interests you, but for many people collecting AFX slot car sets is the way to go. That way you can not only look at the cars but also enjoy them, and thats a huge part of many hobbies. A complete set should include not only cars, but also track, a transformer and controllers. Its everything you need to set up and show off.

Whether you start with a kit, or just a single car, the chances are you will move on to racing. Racing slot cars is all about finding that perfect speed; you want to go faster than everyone else, but not so fast your car flies off the track.