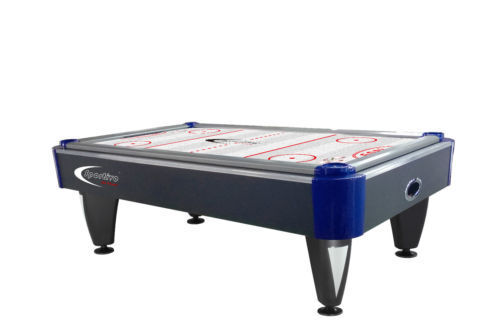 Air hockey is a fast table game that was invented between 1969 to 1972, usually pitting two players against each other, but sometimes four. Air hockey tables usually have a means of providing a thin cushion of air on the surface, hence the air in air hockey. This results in a low friction surface and high-speed gameplay. All you need to play the game are a proper table, strikers and pucks.

Very different from typical table tennis equipment and tables, air hockey tables are usually designed for two players. However, there are a few models designed for four players, though these are not used in competition. Full-size tables are eight feet in size (measured diagonally), but tables for home use are available from sizes as small as four feet. Smaller sizes are a better choice if the players are children. More expensive models may feature electronic scorers, while simpler ones have manual methods to keep score. In general, smaller models feature weaker airflow than larger ones.

Pucks come in different sizes suitable for air hockey tables of varying size. Since larger tables usually have better airflow, larger and heavier pucks work better on them. Pucks that are too small can often fly off the table. Conversely, pucks that are too large for small tables result in slower play. Consider 80, 75 or 63 mm pucks for large tables; 63 mm pucks for medium-sized tables; and 55 mm pucks for the smallest tables. Most pucks are made of light, but hard, plastic. If you prefer more quiet gameplay, consider low noise models featuring softer plastic in their construction.

Like equipment for other sports, air hockey has officially recognised equipment and rules. Only large eight-foot tables are allowed for official use. Moreover, while pushers may be of any colour, the colour of the outer rim must be different from that of the tables surface. Lastly, only pucks of three colours are allowed: yellow, red and green.