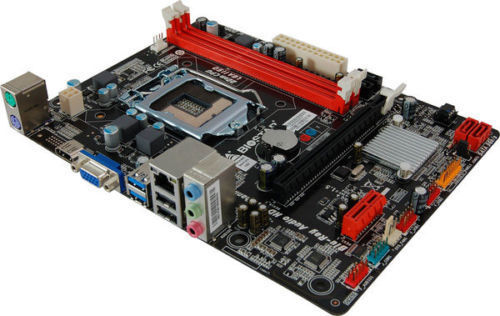 Biostar was founded in Taiwan in 1986 as part of the countrys technology boom. They originally focused solely on making motherboards but quickly expanded their business to include other computer parts. In 2006, the company was recognised as one of Taiwans top 20 global brands. Today it has offices in the United States and Europe as well as Taiwan and makes a wide range of computer products. This includes several motherboard designs as well as solid state drives, graphics cards and peripherals like keyboards and mice.

A motherboard, or mainboard, is the part of a computer that ties all the other parts together. It has connection points for essential computer components like graphics cards, CPUs and RAM. Typically a motherboard will also have some expansion slots for adding extra components as well as a built-in fan for keeping the components cool. Motherboards are not universally compatible with all components. When choosing a motherboard, you need to make sure that it has the right socket type for your preferred CPU. Some motherboards may have certain components like the CPU or graphics card integrated into the design, especially those built for laptop computers.

Biostar makes several different types of motherboard aimed at different users for both Intel and AMD processors. The Hi-Fi series is aimed at both gamers and multimedia enthusiasts. It includes Biostar Hi-Fi technology aimed at producing high-fidelity HD sound, with a high-powered built-in amplifier and capable of delivering a 24-bit sampling rate. The Pro series is built for performance, with models like the B250MDC capable of supporting up to 32 gigabytes of RAM for the most demanding gaming and media processing applications. The Racing series is built for gaming and also highly customisable with different LED colour and flash modes controllable from an app. The most advanced versions include high-speed SATAIII and USB 3.1 connections, capacity for up to 64 gigabytes of DDR4 RAM, support for 8th generation Intel processors and an advanced cooling system to stop all of that high-performance gear from overheating. They also make Intel and AMD mini-motherboards with integrated CPUs and graphics.

Motherboards are a large part of Biostars business but far from the only thing they produce. Other Biostar computer components include solid state drives in a range of capacities, graphics cards and computer mice. As well as their standard computer components, Biostar also sells motherboards and cards designed for cryptocurrency mining. Their Crypto Mining Card is designed to allow high-performance Biostar gaming motherboards to be used to generate currencies like Bitcoin.