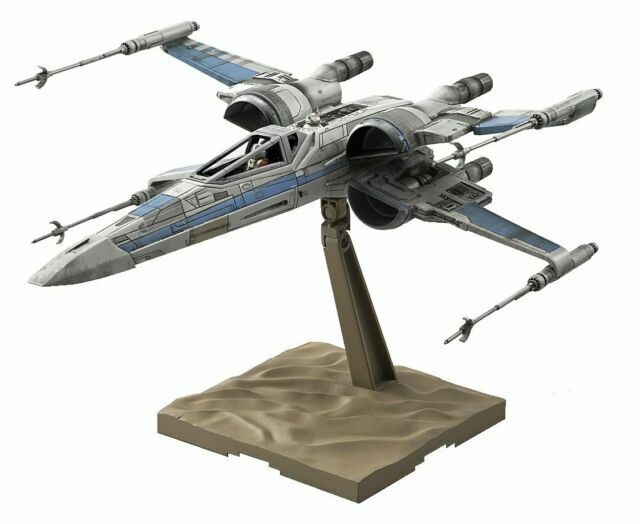 Star Wars is filled with fascinating images and designs, starships and vehicles, characters and monsters, alien creatures and villains. If you find you have a fascination with these designs, and if you’re looking for a hobby that rewards focus and care, you might be interested in Bandai’s range of Star Wars modelling kits. The range encompasses everything from TIE fighters to C-3PO, and covers scales from 1:6 scale to 1:3000 for the Star Destroyer (it needed a lot of scaling down to even fit through the door).

These Bandai Star Wars modelling kits come unassembled and are for the most part not intended as children’s toys. They require careful clipping from a plastic frame and commonly consist of a lot of parts. They may be suitable projects for older children with parental supervision, but once put together they’re better off in a display case than a toy box. The plastic the models are made from is coloured appropriately for the character or vehicle it represents, but you’ll want to paint the model after assembly to really bring out all the detail and make it pop in the display case. For painting scale models like these, specially formulated acrylic paints are best.

There’s broadly two types of Bandai Star Wars modelling kits; Bandai Star Wars character figurine models and vehicles, whether that’s a Star Destroyer or just an X-Wing. A lot of the smaller vehicles, like Darth Vader’s prototype TIE fighter, will have little humanoid figurines inside representing the pilot, and then there’s models like the speeder bike. The experience of assembling a detailed vehicle is quite different from assembling and posing a character model, and some people might find one or the other more to their liking. If you’re keen on the Star Wars universe’s many fighter crafts, check out the Tell us what you think - opens in new window or tab