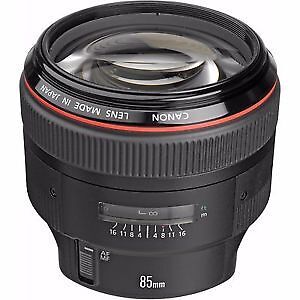 The Canon EF Series is one of the most popular lens types available today. With a massive range of designs currently produced and a large number of compatible cameras, EF lenses are a high-quality and readily-accessible option for photographers.

Canon’s EF lens mount is their standardised system for mounting lenses on Canon cameras. It was first introduced in 1987 for their SLR cameras, replacing their FD system, and remains a standard system for Canon to this day. The EF stands for electro-focus, referring to the motors that are built into EF lenses for automatic focusing. Previous Canon lenses had relied on motors built into the camera itself to drive their autofocus systems. While Canon has moved over entirely to in-lens autofocus motors, some competing companies still use in-body autofocus motors in their DSLR cameras.

As well as mainline Canon EF lenses, the company produces two EF subtypes. Canon EF-S lenses are designed to be used with compact cameras featuring their APS-C sensor. These are typically entry-level and midmarket cameras, including all models of the Canon Rebel. Standard EF lenses are compatible with APS-C cameras. However, EF-S lenses cannot be mounted on Canon’s full-frame cameras. The other subtype is the EF-M lens family. These are designed to be used with Canon’s mirrorless cameras, including the M3, M5, M6 and M10. EF-M lenses can only be used with mirrorless cameras and are not backwards-compatible with DSLRs. However, mirrorless Canon cameras can be fitted with EF and EF-S lenses using an adapter.

Every consumer lens that Canon currently produces is either an EF, EF-S or EF-M lens. This includes a huge range of lenses, including standard zoom and prime lenses as well as more specialised types like tilt-shift lenses, telephoto lenses and macro lenses. As one of the largest camera lens manufactrers in the world, their selection includes everything from ultra-wide angle Canon EF 17-40mm camera lenses to their macro Canon EF 100mm camera lenses.

Canon produced their first proprietary lens in 1946, but did not introduce the EF mount until 1987. Older Canon lenses might not have the advanced autofocusing systems of their modern counterparts, but they are still prized by vintage camera enthusiasts. Canon’s FD series, the precursor to the EF lenses, has also won a new lease of life thanks to mirrorless camera users. Enthusiasts point to the relatively low price of vintage lenses, the wide availability of adapters and the relatively small selection of EF-M lenses released.