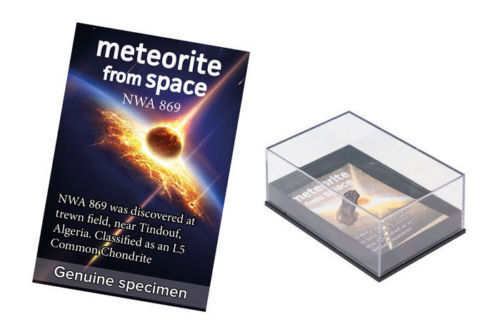 People’s fascination with things falling from the sky has lasted millennia and it has only been grown since the start of the Space Age. The meteorite rock has continued to attract the attention of collectors thanks to this enduring fascination. Of course meteorite rocks are just one of many collectable rocks, fossils and minerals to be found. There are also plenty of other collectable rocks, fossils and minerals like precious crystals and tumbled stones that may pique collector’s interests.

There are a number of details and features that contribute to the type of a collectable meteorite stone. Of course there are the obvious details like size, weight and their meteorite of origin. Some meteorite rocks have a cut surface so that you can see the patterns within, while others may have been etched. Other times people will have coated a meteorite rock in a material like wax, oil or lacquer in order to prevent rusting.

One particular type of meteorite rock garners special attention - the moon rock. Also known as a lunar meteorite, these are rocks that were ejected as the result of an impact on the moon’s surface and fell to earth as a meteorite. Due to strict restrictions on government acquisition in some countries, most moon rocks available for purchase originate from impacts in either Africa or Oman.

Among other interesting collectable rocks you can find related to meteorites are tektites, small bodies of natural glass formed as debris during the impact of meteorites. They are generally only several millimetres or centimetres, about the size of a gravel stone, but with a glossy surface similar to volcanic glass.