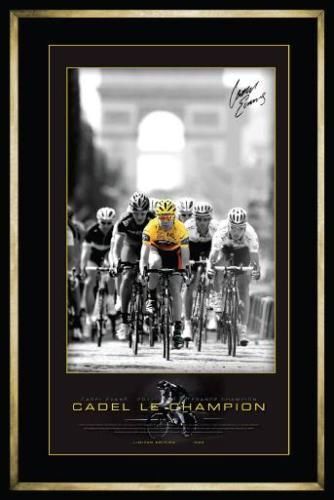 Cycling memorabilia for all enthusiasts to enjoy

Cycling is a pastime that is enjoyed as both a recreational activity and as a sport around the globe. The popularity of cycling as a sport has been spurred on by recent Olympic games and the gruelling annual race the Tour de France. For some enthusiasts, it doesnt stop at buying the bike and the associated gear. For some, cycling memorabilia has also become a big trade for fans of the sport.

In Australia, the popularity of cycling has increased in recent years, so much so that in 2012 more bikes than cars were sold in the country.

Legendary cycling heroes from all over the world have produced a wealth of racing photos and posters, signed jerseys, collectables and personalised gifts for fans. If you are looking for an ideal gift for a cycling fan, then look no further. Amongst cycling posters, you might find cycling victories, old bike advertisements and black and white photos of classic bikes and bike production.These will look good in anyones garage to inject a bit of character into the place.

Over the last forty years, cycling has produced legends such as Bernard Hinault (France), Peter Sagan, the Slovakian rider who made the cross-over from mountain biking to racing, and the 2012 GB Olympic stars, Sir Bradley Wiggins and Chris Hoy.

Individuals and team glories have been captured for fans to cherish. For Australian fans, a proud moment was when Cadel Evans became the first Australian cyclist to win the yellow jersey when he triumphed at the 2011 Tour de France. As a result, there is a selection of authenticated framed posters, prints and photos capturing his victory which include signed swashes of his infamous jersey for fans to buy and cherish.

If cycling memorabilia inspires you to get into the sport itself, browse the range of cycling clothing, equipment and accessories on eBay.