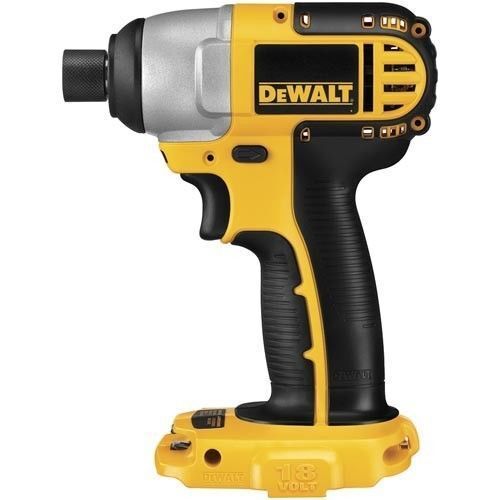 DEWALT is a tools company with a long heritage. First founded in 1924 in Leola, Pennsylvania, it is now owned by the global hardware giant Stanley Black & Decker. DEWALT serves residential and commercial clients alike and its black and yellow tools are recognised by tradesmen around the world.

The cordless drill is a versatile and popular tool, but sometimes you run into materials that it just can’t handle. This is where impact drivers come in, solving the problem with sheer brute force. An impact driver uses a combination of a rotating bit and repeated concussive impacts to drive a screw through even the densest hardwoods extremely quickly. The increased speed gives it a clear edge over an ordinary drill if you need to drive large screws or if you have to drive a lot of screws, for example when building a deck. Despite the repeated impacts, it also takes strain off the wrist, both because the impact driver is doing more of the actual work and because the impacts are so frequent that they feel like a constant hum rather than regular jarring.

DEWALT cordless impact drivers make up their entire impact driver range, which is little surprise in an industry that is moving over to cordless tools en masse. While they are all cordless, DEWALT impact drivers do come in a variety of voltages. DEWALT 18V impact drivers are their mid-powered option, sitting between their lighter 12V models and the higher-powered 20V models that make up the majority of their range. A large number of DEWALT cordless impact drivers also feature brushless motors, a technology that the company has invested in heavily. Brushless motors have a number of important advantages over brushed motors. First, without friction from the brushes, the tool can be more efficient and generate more power at a given voltage. The reduced friction also reduces wear on the tool’s inner workings for a longer working life. Second, brushless motors can adjust their power automatically to adapt to the resistance that they are meeting.

No cordless drill or impact driver is much use without a bit. DEWALT impact drivers use 1/4-inch hex bits, which are widely available from a variety of manufacturers. However, impact drivers place greater stress on the bit than cordless drills due to the repeated impacts, so they require more durable bits like DEWALT’s own Impact Torsion bits.