Doctor Who Costumes for Men 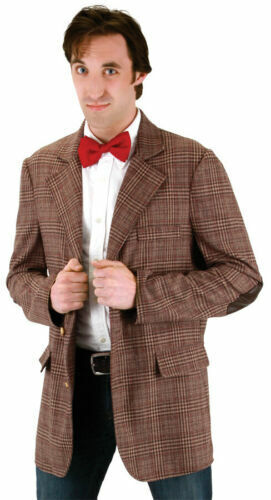 Doctor Who Costumes for Men

Since its premiere in 1963, Doctor Who has been a hit. Its charming characters, dastardly villains and arcing storylines have drawn the attention of viewers for more than 50 years. The series follows The Doctor, an alien who occasionally takes on different forms and travels through time and space in his retrofitted Police Phonebox. Pop culture and fans worldwide have wholly adopted this franchise, and costumes are now available so you can play the role of any of your favourite characters.

If you are going to a dress-up party or pop culture event, there are many men’s costumes to choose from. While some people may choose a reality TV star or someone from history, do them one better by becoming one of the incarnations of the last Timelord.Doctor Who costumes come in different sizes, and with most of the apparel consisting of suits and other everyday pieces, you can easily wear them again at other functions.

Don’t worry if you have to coordinate your costume with your partner. There are plenty of women’s and children’s Doctor Who costumes to accompany yours. A popular choice for women would be dressing as one of the Doctor’s companions, like Adric, Sarah Jane Smith or Rose Tyler. Kids will love taking on the role of a dalek or the Tardis.

Where to Wear It

There are quite a few places you can wear your costume. Halloween is always a great chance to dress up, as are birthday parties and celebrations with a character theme. For the die-hard fans, pop culture conventions are the stomping grounds of many a Doctor, companion and cyberman.