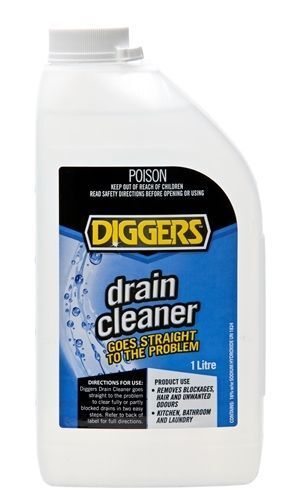 Drains can easily get clogged or blocked over time, resulting in slow-flowing water or even a complete blockage. In bathroom drains, blockages can be caused by hair, soap residue and organic matter, toilet drains can get blocked with toilet paper, while kitchen drains can feel the effects of grease build-up and food scraps. However, blocked drains can also be caused by trapped foreign objects, such as a ring or a small toy, or for anyone who lives in an area with hard water, hard water deposits can accumulate on pipe walls.

So, whats the best way to unblock clogged drains? Really, that will depend on what kind of blockage it is, and where the blockage resides. Many people opt for chemical drain cleaners to provide an easy way to clear blocked drains. Using active ingredients such as caustic potash (potassium hydroxide) or lye (sodium hydroxide), oxidising agents such as bleach (sodium hypochlorite) and acids such as sulfuric acid, these chemical cleaners can clear away build-up in the pipes, working to break down blockages. However, with this option, its important to choose the right chemical for the right job.

Plungers offer another way to unblock drains, using suction to unblock the pipe, while another alternative is a drain stick. This type of drain cleaner can be poked down the pipe - but only as far as the P-trap - to then twist round, capturing the blockage on its hooks, so it can be pulled out.

A hand auger is another type of drain pipe cleaner, which is flexible enough to be navigated through the bends in a drainage system. On the end of the hand auger is a sharp, coiled head, which can be rotated and pushed into the blockage, so that it can be dragged back out. For more heavy duty drain cleaning, there are drain cleaner machines, but these of course, require a more substantial investment. To check out all the options, take a look at eBays extensive plumbing range to find everything from drain cleaners and plumbing tools  to plumbing taps and mixers.