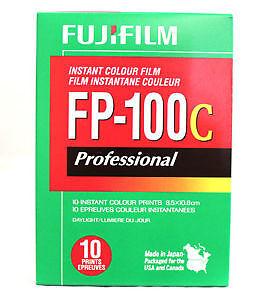 Fujifilm’s FP range of instant camera film is one of the best-known names in instant photography. Although it is no longer produced, unopened film is still widely available.

Once the standard, film photography is now a niche pursuit in an age dominated by digital, but it still retains some advantages over more modern technology. According to film enthusiasts, the limited number of shots on a roll forces photographers to take greater care with their composition and framing. In medium and large formats, film can also provide greater resolution than digital. While modern digital photography now holds most of the technical advantages, film photographers also point to the experience of shooting film as a major point in favour of the medium.

Fujifilm FP film is a peel-apart instant photography film. Instant film contains its own developing chemicals and is developed in the camera immediately after shooting. With peel-apart or pack films like Fujifilm FP, the user has to peel a paper cover off the print to see it after development. While instant photography is quite specialised, it can still be used to do things that digital cameras cannot replicate. While regular film needs to be developed and digital can stay on a hard drive for a long time before you get around to printing it, instant film gives you a physical picture almost immediately. It also lends your pictures a unique, retro aesthetic that you would need a lot of filters to achieve with digital.

Fujifilm’s FP films are some of the most well-known instant films. Fujifilm produced black and white FP films such as the FP-3000B as well as colour FP films like FP-100C. Fujifilm’s FP series films are no longer manufactured. FP-100C was discontinued in 2016, with the company citing decreased demand for instant film. Production of FP-3000B had already ceased following a discontinuation announcement in 2013. Today, Fujifilm’s instant photography efforts are focused on their Instax range of instant cameras and instant film.