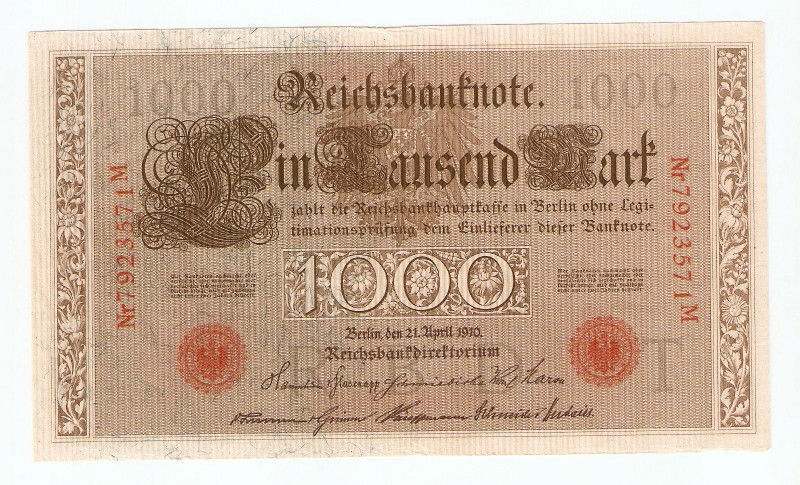 German notes to add to any collection

Ideal for collectors of world currencies, German notes add some flair to any collection. Find the perfect notes to complete your collection, from single notes to bulk buys.

Much of the flair of German notes is the striking typography, beautifully illustrated by the 1910 50 mark note. The ones with the most imaginative illustrations can be found on the ‘Notgeld notes. This was emergency money issued during the first world war, having been designed by a number of different institutions, other than the central bank, giving them a wide variety of colours and designs. You can buy these European notes in mixed lots on eBay, a great start to any collection.

As well as emergency money there were also reserve banknotes, the state of geopolitical tension after World War 2 raised concerns that there would be a sudden currency reform so these were issued. Notice how the design was similar to the existing currency of the time but different enough to distinguish should the current circulation be declared obsolete.

German banknotes reflect the history of two world wars and a collapsed economy when the German mark suffered from hyperinflation between 1918 and 1924. This hyperinflation was due to the debt of losing the First World War when money was being printed without the economic resources to back it up. This is why you will see German marks in the millions, like the 1923 five million mark Reichs banknote.

You will find limited edition runs on private issue notes that were never legal tender. For example, the 2016 300 mark note with the image of German politician Erich Honeker. With a run of only 500, it is a nice little collectors item. You neednt worry about how you are going to keep your collection clean and crease free as there are plenty of plastic sleeves available that you can purchase at the same time.