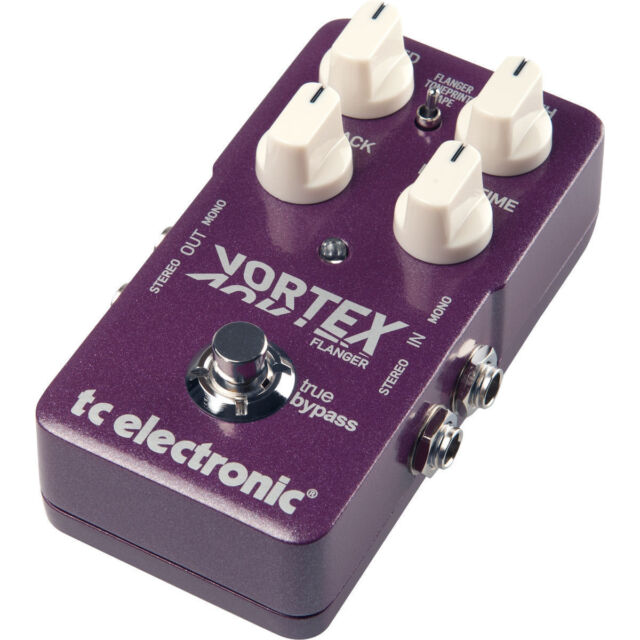 Guitar flanger pedals allow you to apply the audio effect of flanging to your guitar signal—it was popularised by bands like The Beatles and recognisable for its distinct sweeping effect. Effects pedals have a lead in and lead out and can be used with a multitude of instruments and amplifiers. They are often used to produce an audio effect, such as the famous wah volume pedals or in this case the flanger effect.

A flanger is an audio effect that mixes two identical signals together, with one of the signals being delayed by a small and slowly changing amount of time. This produces what is known as a swept comb filter effect and results in the idiosyncratic whoosh sound. Since the development of the flanger into an effects pedal unit, it has become one of the more common guitar accessories for those wishing to emulate its distinct sound, associated with bands like Pink Floyd and Queen.

Most flanger effects pedals have four knobs—speed, width, manual and regen. The first three are related to what is called a low-frequency oscillator. The LFO is what defines the sound and shape of the flanger effect, whether it produces a chorus like effect or classic finger sweep. Regen refers to feeding some of the delay output back into the input, which intensifies the flanging effect and allows for more sonic experimentation.

There have been particular flanger effects pedals that have become well known within the music community for their use either live or on popular recordings. The first flanger in an effects pedal form, the Electro-Harmonix Electric Mistress was used by famous musicians like David Gilmour and Andy Summers. Also popular is the MXR M117R, which is known to pair well with distortion and notably used by Eddie Van Halen. Theres also the affordable and roadworthy Boss BF-3. As each unit can sound different, compare the sounds to find the best fit for you tastes and your setup.

Most flangers will need 9 volts through an AC adapter or effects pedal power supply; however, some models may take batteries. They can be used in combination with other guitar accessories, such as bass effect pedals, provided one has all the required guitar leads and power supplies. The position of effects pedals in relation to one another may result in different sounds so experimentation is recommended to find the ideal combinations.