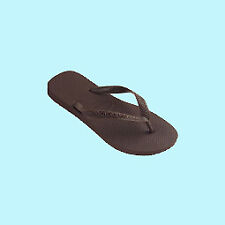 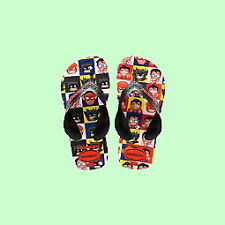 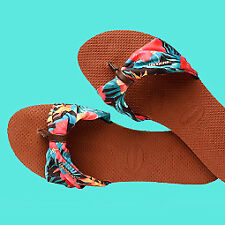 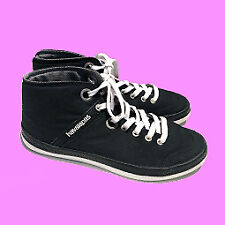 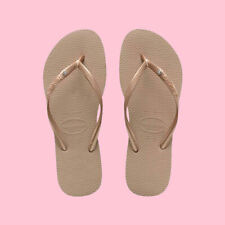 Globally-recognised Havaianas, which means "Hawaiians" in Portuguese, have been kicking around for over half a century, and are some of the most popular thongs or flip-flops in the world. Known for their vibrant palette of colours and laid-back personality, Havaianas have become the essential go-to summer footwear for millions.

Havaianas are manufactured using quality Brazilian rubber that give the soles a texture like grains of rice, one of the design details that makes them so beloved. The iconic brand has a wide range of footwear available for the whole family: men, women, children, and even months-old babies.

From humble beginnings in 1962 I Brazil, Havaianas were originally inspired by Japanese Zori sandals and were initially called "Palmilhas com Forquilha" or "Soles with Forked Straps". Havaianas were originally only available in the now infamous style of blue bottom and white top until their factory has a production error that led to them selling green and white pairs. These became so popular that Havaianas released pairs in brown, yellow and black, which led to every colour imaginable, and eventually their highly coveted printed styles.

Havaianas have even made their debut on the high- fashion runways of the world, used in shows by French designer Jean Paul Gaultier.

With over 300 different styles of sandals, things, flip flops, & footwear in a rainbow of colours, from the infamous standard look, all the way up to custom-made styles embellished with Swarovski Crystals, you are sure to find a pair that suits your needs. The Special Collection Havaianas featuring the crystals or details like metal meshes have all been expertly hand-sewn by artisans located in Northeast Brazil.

To celebrate the ’98 World Cup, the creation of the "Brazil" style with green top, bottom, and strap with a small Brazilian flag proved immensely popular. It remains one of the most recognisable styles and are still extremely popular to this day.

Many women love the Havaianas "Slim" style with its thin, delicate strap, as well as the timeless prints of hibiscus flowers, while children often sport Havaianas printed with their beloved Disney characters.

The simple design of this footwear has a footprint which everyone wants to leave behind. Check out the wide range of Havaianas available on eBay, because there should always be at least one pair of Havaianas tucked away in your closet.