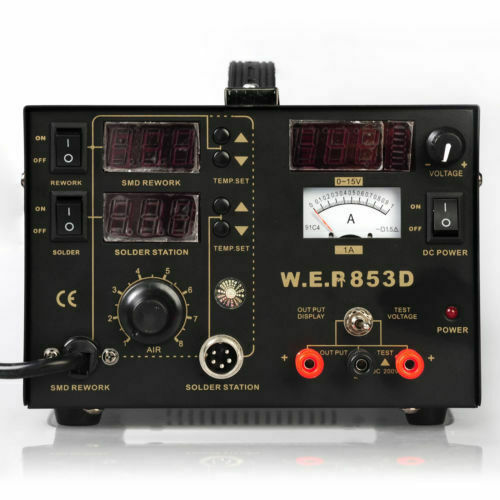 A mainstay of the hobbyist and professional alike, soldering, desoldering and hot-air rework stations allow the creation, alteration and maintenance of electric circuits. Using soldering equipment involves using a heated tool to place drops of solder, usually a lead/tin alloy purchasable in wire form, on specific contact points on a circuit, fusing components into place. Desoldering equipment is used in the process of removing the solder to make a correction or repair. Various ways exist to do this but all focus on reheating the solder then removing it while molten. Hot-air rework can be used to heat the solder, allowing both the removal and immediate replacement of damaged components without having to desolder and resolder.

Soldering stations usually consist of three main parts. The soldering iron, which resembles a screwdriver with a sharp head and a thick grip, is attached by a power cord to the main station that regulates and provides the power need to heat the soldering iron. The final part is the rest, often a metal coil on a base with a small pad attached. The soldering iron can be rested here when active but not in use and the small pad is moistened and used to clean the soldering iron to ensure the tip remains ready to use.

Desoldering stations come in several varieties. Superficially, they will often resemble a soldering station, due to similar requirements for power and safe storage of an active tool. The tool however is the main difference. Some designs feature a pump gun with a thick needle that reheats the solder, then quickly sucks it into the gun’s chamber. These guns can be electrical, spring-loaded or hand-pumped. Other desoldering options require the solder to be reheated and then a thin cord of desoldering braid is applied. This dense weave of copper fibre acts as a wick, drawing up the liquid solder. When depleted, the now solder-filled end of the braid is cut off, leaving the next section clear to use.

Hot-air rework stations are again superficially similar to soldering and desoldering stations, but will generally have larger power requirements and more attachments. A hot air gun is used to liquify the solder, at which time the component can be removed. Hot-air guns can heat large portions of a circuit board, allowing quick removal of multiple components. Replacement is also easily done with new components simply inserted into place in the still-hot solder.

3-in-1 Soldering, Desoldering and Rework Stations

Due to their similarities in design and functions, soldering, desoldering and rework stations are sometimes combined into 3-in-1 stations. While larger and more expensive than their individual counterparts, these stations offer greater capacity and flexibility when working and reworking electrical circuits. 2-in-1 stations are also available and usually consist of a soldering component and either a desoldering or rework component.