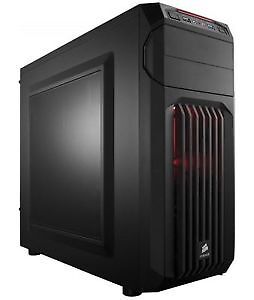 While Intel does not manufacture its own computers, they account for a good chunk of the market when it comes to CPUs used in those computers. The brand offers a huge range of processors all made to cater to a specific user. For instance, if you don’t need much multitasking power, stick with dual-core processors that have higher clock speeds per core to focus on raw processing speed. If you expect to do video rendering, programming, or to have a couple dozen browser tabs open at the same time for work, then a quad-core or octa-core Intel CPU can keep up with your demands and then some.

An Intel Core i5 4th Gen 4 GB all-in-one PC hits the sweet spot for power, affordability, and reliability. Most are fitted with quad-core Core i5 processors for a balance between cost and power, while 4 GB of DDR3 RAM more than suffices for office or school applications. Users might interchange the term all-in-one with preconfigured, but manufacturers clear the confusion when they release literal all-in-one computers wherein the components are incorporated at the back of the display. With low power but fast and cheap CPUs slowly becoming the norm, you can expect to see more budget friendly all-in-ones in every office and school.

If you want a tangible performance boost, an Intel Core i5 4th Gen 8 GB all-in-one PC can solve your multitasking woes. The 8 GB of RAM easily complements the processing speeds from your quad-core Intel CPU to ensure quick loading times, great UI response, and more reliable overall multitasking performance. This Intel Core desktop setup is ideal for workstations in any office scenario, be it a graphic design, accounting, or tech support office.

These computers aren’t restricted to school and work applications. You can easily make an all-in-one PC desktop your main computer at home. Thankfully, this design retains the important customisability of a PC as many designs allow you to upgrade the memory and internal storage. This means you can futureproof your PC in many of the aspects that matter, save for a better graphics card, that is.