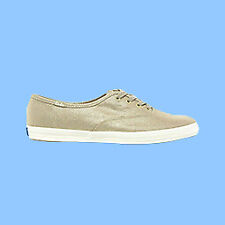 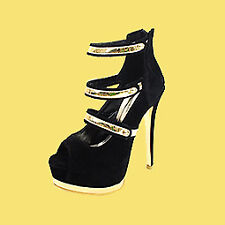 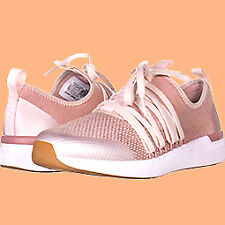 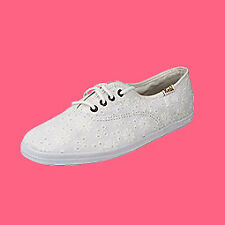 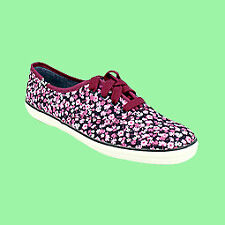 For over a century now there have been generations of women who have walked, marched, danced, debated, launched, grown, run, and won, all while wearing Keds on their feet. And those fearless women who took on the world while wearing these sneakers, they're really just like us.

Is here anything more classic than a classic pair of Keds?

The footwear brand has been putting ladies first ever since they launched in 1916, by creating footwear that harmonises fashion with functionality with a reimagining of the classic canvas sneaker. Because these shoes have been designed for the modern woman, they're no longer running shoes, but instead they're run the world shoes!

Keds has also had many collaborations over the decades, working with some of the biggest names in design, using only the highest quality materials, to create shoes that are wearable, practical, stylish, and totally empowering.

Embodying the suburban lifestyle of 1916 America, Keds were the creators of the original training shoe. Their sneakers designs were a simple, yet chic take on canvas footwear. Thanks to their unparalleled comfort and crisp look, their signature sneaker with their slip-on and lace-up styles eventually grew to become the icon status of today.

Those rubber-soled wonders went on throughout history to run across championship tennis match courts, march along the paved streets of progress and change, as well as danced around the globe in nightclubs, bedrooms, and all over city streets.

The classic American footwear always stayed true to their casual heritage of fun, which is why they can now be found in low-cut re-interpretations with boldly colourful prints, as well as their original canvas styles. In addition to turning out the various styles of timeless canvas kicks, Keds have expanded into the realm high-fashion after collaborating with some big names in fashion. The resulting pairs of-the-moment feature details of gingham, glitter, and even lace.

Because the company is run by women, they are always passionate about hearing stories and about journeys of the empowered women that they create their sneakers for. Keds truly believe that a better representation of the voice of women is what will lead to us all to a much better world.

Keds have recently become cool again, not hat they ever really went out of style. These venerable pair of sneakers have always been stylish, no matter what the current trends may be.

In today's age when comfort reigns supreme, other shoe brands like Birkenstocks and Tevas are more like wardrobe pre-requisites than the expected fashion faux pas. So, the versatile style of Keds' is certain to have a staying power all of its own.

Keds definitely don't belong in the "ugly shoe” category. Sure, their original style does have a classically plain feel, and they don't ever scream that they're stylish, but Keds certainly have never been offensively unfashionable either. Keds aren't Crocs.

Many years after pioneering the first sneaker style of shoe, Pro-Keds was created as an all-American line of athletic footwear in 1949. Originally intended to be worn when playing basketball, Keds created different versions of the trainer for other sports too, such as tennis, football, as well as track and field. Pro-Keds trainers today are as still as popular as ever, as they continue to draw on their heritage of iconic styles, while also combining them with more updated and contemporary colours or materials. Take home a piece of history today with a pair of Pro-Keds trainers for men, available in canvas or leather, and with a high or low top.

Equal parts refined and relaxed, this Kickstart sneaker was designed in collaboration with Rifle Paper Co. which easily creates a way to transform a more basic look into an Instagram-worthy ensemble that's sure to turn some heads. A chic counterpoint for a dress, or perfectly matched with denim, these floral style of canvas sneakers are sure to become an instant favourite, featuring the signature garden party print of Rifle Paper Co. These sneaks seem to dial up the feminine appeal, thanks to the little hints of shiny hardware, while the breathable and durable canvas uppers work alongside the cushioned insoles to stand up to the hustle of the daily grind together.

Luxurious satin laces and rose gold glitter are combined to grace our coveted Triple Kick, which seems to provide the flatform sneakers with more than a major dose of shiny sophistication. These glitter shoes can easily be paired with almost anything, so you can watch your style stock soar with a pair of denim jeans or a classic Little Black Dress.

The company's response to customers asking for ever-higher platform sneakers are the new Triple Up kicks, which provides you with a whopping 1.5 inches of height. The perfect complement to modern bottoms is the classic tennis shoe styling, which also creates a versatile silhouette you can see plays well with any style from leggings to a flowing dress.

It may look like a shoe your guy friend may wear, but unlike his sneaker, these feel as though they have been created just for you… because just like all their other sneakers, they were designed specifically for dimensions of woman's feet. Not only was the retro look of these kicks borrowed from boys shoes, but they were also taken from their own archives, which featured that classic 1970s sporty wave logo, which explains the "75” in their name.

The leopard print corduroy gives these sneakers a cool textural twist combined with a major dose of edginess that seems to work with everything. These sneakers look particularly killer when poking out from beneath a maxi dress or an ensemble of all-black.

Shop the wide range of Keds shoes available for you on eBay today.

Shop for Keds and browse great smart and casual footwear looks from a celebrated and long established American brand. Simply select Afterpay as your payment method at checkout.