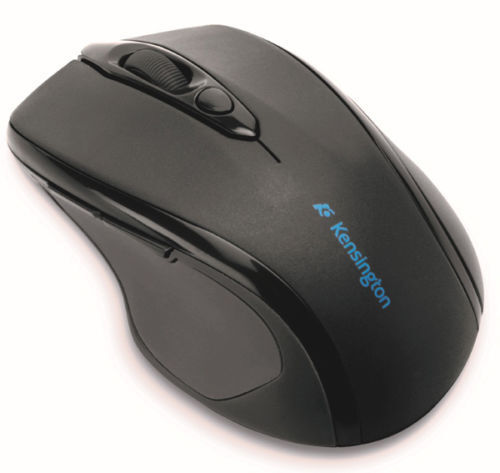 Computer mice are either wireless with a USB broadcaster or they are wired and plug into a computer’s USB port. Some wired mice have retractable cables. Most modern mice are optical mice and use a small infrared laser to track the mouse’s motion. Kensington mice are available in a variety of colours including black, white, red and blue.

Kensington trackballs are an alternative to mice, while still featuring similar mechanics in their design. Trackballs are immobile pads with a large central ball and several click buttons in front of it. Instead of moving a mouse, on screen motion is accomplished by rolling the ball. This has several benefits. The first is precision, with trackballs being commonly used in graphic design software as a result. Another benefit is that trackballs have no limit to effective range unlike a mouse, which can move too far and run out of deskspace. Finally, as trackballs generally have supportive wrist pads and require no major hand movements, they are often more ergonomic than mice.

Kensington touchpads provide similar functionality to trackballs, but replace the large central rotating ball with a touchscreen. While maintaining the benefits of trackballs in regards to precision, scrolling range and ergonomics, the touchpads also have a less obtrusive profile. Their flat, sleek design frees up desk space and is perfect for those users who like to keep a clean and open desk.

Kensington, in addition to mice, trackballs and touchpads, offers mouse pads, keyboards and more. Kensington has ergonomic and anti-skid mouse pads as well as mouse pads with wrist rests. Bluetooth keyboards connect wirelessly to computers. Kensington also sells Presentair, which is a combination of a presenter, laser and stylus.