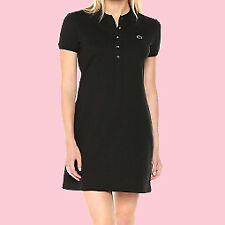 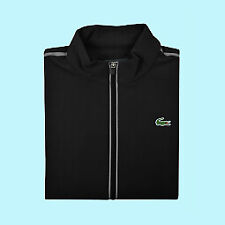 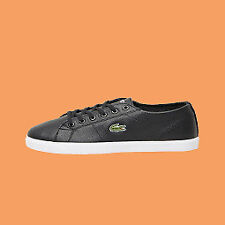 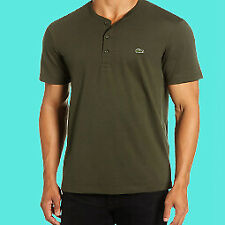 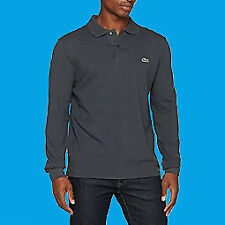 With a passion for innovation, and a love for the game, plus just a dash of French elegance, life is such a beautiful sport with Lacoste. Every second that goes by 2 Lacoste items are sold in the world.

French sportswear brand Lacoste has really shaken up the scene, delivering a wide range of reinvented classics and iconic styles to become one of the go-to styles for that truly street-inspired look of luxury.

French tennis legend René Lacoste revolutionized the everyday wardrobe of men everywhere ever since Lacoste was launched, when he invented the very first original classic polo t-shirt almost 90 years ago in 1933.

A truly revolutionary knit designed by René Lacoste himself, petit piqué is the emblematic fine mesh fabric of the Lacoste polo that provides its signature elegance and comfort. French knitwear capital Troyes is where the savoir-faire of this unique polo was born and is still being exported from there all around the world today. Even though the style of the polo has shifted along with the many changes to the fashion scene, its manufacturing methods haven't changed at all since 1933.

The 5 steps that require precision, expertise, and an eye for detail include the knitting, cutting, dyeing, and attaching of the infamous embroidered crocodile logo, before finally assembling all of the pieces which combine to give the Lacoste polo its inimitable style. As the leading player in the market for premium casual wear, and their authentic sport inspired roots, Lacoste springs both elegance and optimism on the world. These days, the infamous Crocodile logo is available in over 120 countries through their selective network of distribution.

Who Was René Lacoste?

Born in 1904, the founder of this eponymous brand and tennis legend Monsieur René Lacoste was the passionate inventor behind this clothing revolution. René Lacoste won a series of Grand Slam tournament victories between 1925 and 1929, while also dominating the international rankings in tennis. René racked up victory after victory with 2 victories at the U.S. Championships, 3 wins at Wimbledon, and 5 wins at the French Internationals to become the number one tennis player in world.

The Story of the Crocodile Symbol

While travelling with the 1923 Davis Cup Team to Boston, René Lacoste noticed a crocodile suitcase and his coach Alan Muhr joked that he would buy it for him if he won the next match. This anecdote is behind his nickname The Alligator which was immortalised forever by a journalist nearby from the Boston Evening Transcript. Artist Robert George was responsible for bringing the crocodile logo to life ready to become the brand's signature emblem when it was launched ten years later.

The Polo: Secrets of a Legend

Discover the savoir-faire in every single stitch in the fabric of this essential wardrobe staple of sportsmen everywhere. The Lacoste style was iconic clothing that had been inspired by sport, and the expression of the modern French style which was inspired by golf and tennis. Constant inventor and tennis legend René Lacoste was perpetually seeking that truly relaxed elegance, which explains how he created a truly emblematic wardrobe which of course included the short-sleeved polo.

René Lacoste believed that above all else, elegance requires clothes that had been adapted to suit the circumstances or situation. A man of his word, René Lacoste proceeded to invent the now iconic polo tee simply by cutting the sleeves off a long sleeve shirt, as he felt it was hardly appropriate for playing tennis or golf with such long sleeves. The polo revolution went on to conquer not only the world of sport, but the rest of the world too. René Lacoste officially launches his brand with his first advertising campaign for the infamous polo, entering the world of fashion and becoming a legend again in the process.

So, that's the story of how revolution came to fashion world when the polo was born in the year of 1933, and the Lacoste style became instantly defined. Thanks to its relaxed elegance, unique style, and easy comfort, the L.12.12 polo quickly became a contemporary and classic style icon of men's wardrobes all over the world.

L was for Lacoste, 1 was for its unique fabric, 2 was for the short-sleeves, and 12 was for the version that was ultimately chosen by René Lacoste.

Lacoste has a wide variety of fashion products available for your wardrobe including apparel, sunglasses, footwear, bags, and other accessories, which have all been created in the most responsible, qualitative, and ethical way. Step up your style as well as your game with a logo crew neck tee for that authentic street style, so you can really turn some heads wearing this season's Lacoste.

Every season has always had its colours, and in 1951 René Lacoste unveiled his range of monochromatic polos which were then followed by polos with stripes. Then less than a decade later, Lacoste launched his children's collection.

These days Lacoste can often be seen on many of the biggest celebs, who usually go for that classic look of Lacoste logo tees in navy, red, black, or white. Choose from Lacoste track pants, crewnecks, or otherwise you can go for the truly classic crocodile logo sweatshirts, hoodies, tees, and of course polos. Don't forget you need something to add that A-list edge to your weekend outfit, and you can keep your Lacoste clothes in iconic Lacoste's new capsule of side bags when you're off to the game. Lacoste even have a wide range of health and beauty products.

From the brand's superior and iconic polo shirts to their hoodies, soft knits, and even their signature scents, eBay has a stylish selection of stylish Lacoste products available online for you today. Browse through the entire available range and you will be sure to find all of your preppy, stylish, and uniquely laid back Lacoste essentials. So as soon as you are ready, you can jump right into your new iconic Lacoste polo tee and cop that now infamous crocodile heat.

Shop for Lacoste for the latest range of polo shirts, trainers and jumpers. Simply select Afterpay as your payment method at checkout.