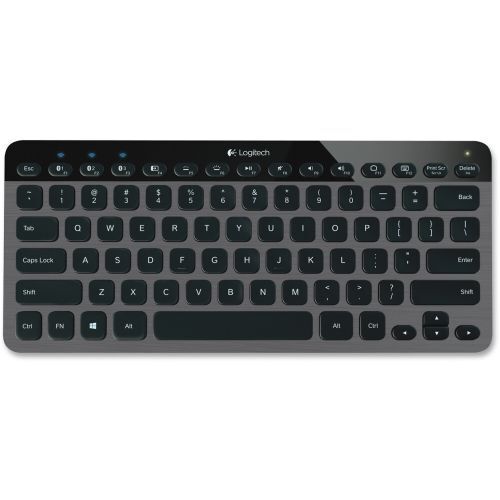 Despite years of trying, no one has ever been able to unseat the ubiquity of the common computer keyboard. Whether youre a gamer or a novelist, there are Logitech computer standard keyboards and numeric keypads to meet your every need. With over a hundred keys in a standard layout, a keyboard is just too flexible to say no to.

Logitech gaming computer keyboards and numeric keypads reflect the cutting edge of keyboard technology. From programmable lighting systems to mechanical keys, these keyboards can take anything even the toughest games can throw at them. Mechanical keys give a more positive action and longer life than standard membrane keyboards. Programmable game configurations make sure you can reconfigure your keys for any game in a fraction of a second. Its more than just seeing the light.

Wireless computer keyboards are one of the best ways to avoid desktop clutter, and they are also great for home theatre PCs. The Logitech K400 Plus offers a full size keyboard with a side-mounted touchpad and a ten-metre range. Its a perfect choice for streaming media from your computer to the TV. Other wireless options include both full-size keyboards and keyboard and mouse combinations. You dont have to change the batteries often, either. Logitech even offers a solar wireless keyboard that runs off ambient light.

Many Logitech keyboards also come with the companys unifying receiver technology. Nobody likes the fact that most computers lose two USB ports right off the top because they need one for the keyboard and another for the mouse. Logitechs unifying receiver is a small USB dongle that can control multiple Logitech USB devices. Best of all, you dont have to limit yourself to the devices the receiver came with. You can connect up to six supported devices to one receiver as you need them. That way you have one receiver and everything just works.

Despite the growing popularity of wireless solutions, Logitech also offers wired keyboards for those who prefer them. Wired models dont need batteries, and they are popular with gamers because they are often a touch more responsive.