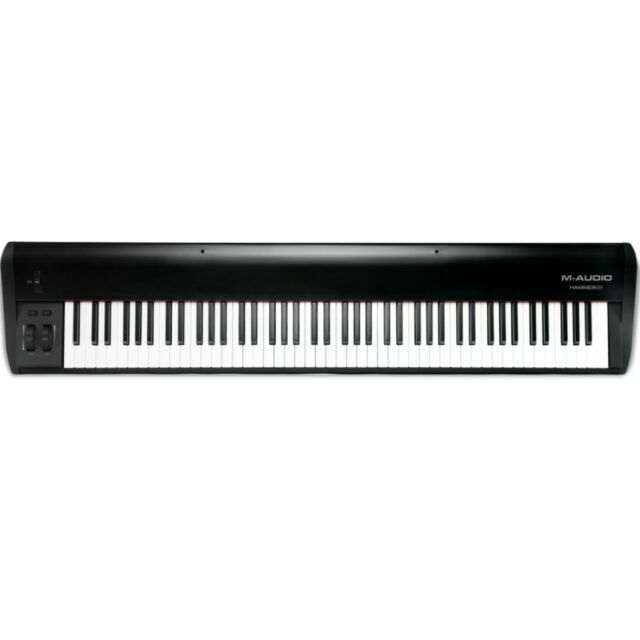 Any DJ or musician can benefit from a M-Audio MIDI keyboard or controller. With all the software packages out there, computers have taken over the music industry in the same way they have most other creative fields. The only problem is that a standard computer keyboard creates words, not notes. Dedicated MIDI controllers turn computers into music stations.

In a rare example of forward-looking design, the basic MIDI specification dates back to the early 1980s. The idea was simple, to create a common digital language to enable the recreation of any musical passage by simply stringing together a series of codes. It was like musical notation for synthesizers. Although designed for instruments, once computers came into common use musicians and DJs simply took advantage of the existing protocol for getting music into and out of computers.

MIDI keyboards and controllers fall into two main categories: instrumental keyboards and other controllers. Instrumental keyboards resemble a piano keyboard, though they may come with fewer keys. A model like the Hammer 88 has the full 88 keys and is commonly for composing. Most introductory models come with fewer keys, making up for the difference with additional presets and other controls. Many keyboards can even lay down the bass line while you play around it.

Often popular with DJs and other performance artists, MIDI interface controllers often do away completely with the traditional keyboard setup. Relying on knobs, tuners, and even scratch pads, they let you modify music in real time. Push one button, and you set up your bass, another covers percussion. Adjust the speed with one dial and volume with a slider.

The first step in choosing a controller is deciding what you want to do with it. An instrumental keyboard is better for composing, while a more complex interface shines in performance and playback. Also, while the MIDI interface may be standard, the physical interface is not. Most controllers rely on a USB interface to the computer, but some also include USB input for additional controllers such as pedals.