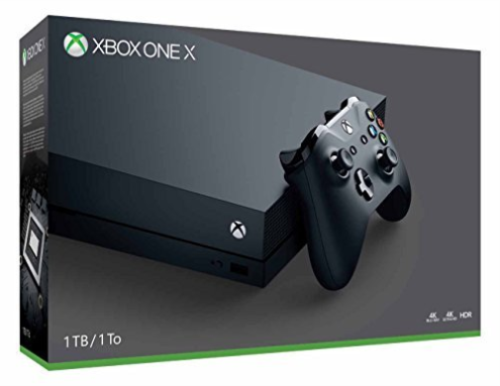 Get complete entertainment with Xbox One X video game consoles

Microsoft is one of the biggest names in video game consoles, so it was no surprise when fans were excited about the step up from the Xbox One to the Xbox One X. While the names are similar, the features are quite different.

Rather than being all about video games though, the Xbox One X serves as a full entertainment package, with connectivity to streaming services, music players and the ability to play all sorts of other media. While it’s definitely a great option for the serious gamers, the whole family can also make great use of these great consoles that you can find online on eBay

A cut above the Xbox One

The Xbox One X boasts about 4.5 times the graphical performance of its predecessor. It's great for those who want to experience the stunning visuals of modern gaming.

Another huge step up is the extra 4GB of DDR5 memory. The Xbox One X can be up to 50 percent faster, meaning less time spent on load screens. Combine that with the capability to handle 4K gaming, and you’re onto a winner. With the 4K capability also flowing into streaming service viewing like Netflix and YouTube, you’ve got a pretty complete entertainment package. Bear in mind you’ll need a 4K TV to take full advantage.

You also don’t have to worry about missing out on all your favourite games, because the backward-capability means you can still play all the older games way back to the Xbox 360 library.

When you shop for Xbox One X consoles on eBay, look for some bundles that have games included. If you’re keen to test out the new system straight away, there’s few better ways than with a console and games package from right here on eBay.

Enjoy now and pay later with Afterpay at eBay. Looking for powerful gaming performance? Get yourself an Xbox One X console today with afterpay for endless entertainment. We’ve got you covered with Afterpay, meaning you can get your Xbox One X online now and pay it off with 4 interest-free payments over 8 weeks.