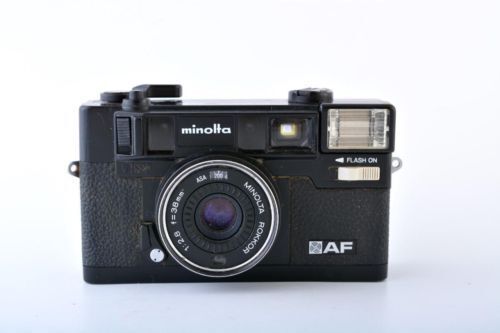 With a history stretching back to 1928, Minolta made numerous cameras before stopping camera production in 1996. The cameras made during those years were often ground-breaking, with the company claiming many firsts, such as with the Minolta 7000—the first SLR with autofocus. Collectors of vintage cameras should consider Minolta cameras as they make interesting collectors items, especially considering their impact on modern photography.

The companys first product, the Nifcalette folding camera came out in 1929 and used 127 film. In fact, Minolta even made a number of dry-plate cameras. The Minolta name was first used in 1932 on the companys first diecast folding camera. In 1937, Minolta released the Minolta Auto Press, the first Japanese camera with a built-in flash synchronisation system. It was in the same year that the company produced its first twin lens reflex (TLR) camera as well. Minolta continued making TLR cameras well into the 1950s. Minolta Autocord TLR cameras made from 1955 onwards can be used with modern 120 colour films.

1947 saw Minolta introduce its first focal-plane shutter rangefinder camera that used 35mm film. Two years later the company revised the camera with a lever-wind film advance—the first of its kind made in Japan. A decade later, in 1958, Minolta introduced the Auto Wide camera, the worlds first 35mm leaf-shutter camera that featured a built-in CdS exposure metre. The same year saw the company introduce the Minolta V2, the first 35mm leaf-shutter camera with a shutter speed of 1/2000th of a second. Then, 1958 also saw the last Minolta rangefinder camera to use the Leica screw mount: the Minolta 35 IIB. In 1962, Minolta made the Hi-Matic, a leaf-shutter camera that went to space with NASA. Two decades and many cameras later, Minolta introduced the Hi-Matic AF-2, featuring autofocus, an electronic shutter and a built-in motor.

Minoltas very first single lens reflex (SLR) camera was the Minolta SR-2, introduced in 1958. While the standard SR-2 is special, the black version is very rare. The SR-2s design inspired the design of all Minoltas succeeding mechanical SLRs, the last of which was the SRT-100X, made in 1977. In 1985, Minolta produced the Minolta 7000, the worlds first SLR with integrated autofocus.

Accessories and Other Cameras

Besides the main range of Minolta 35mm vintage cameras, the company made other cameras as well, including compact 16mm cameras and 35mm Weathermatic models that could even be used underwater. In addition, Minolta made camera accessories, such as its optically excellent lenses, some of which can even be used with compatible modern DSLRs.