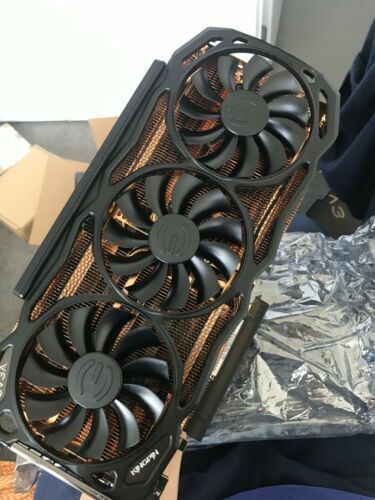 Ready to boost up your play? eBay is home to a sweet selection of Nvidia GeForce GTX 1080 Ti computer graphics and video cards that can change the way you game.

When it was released in 2017, the GeForce GTX 1080 was Nvidia’s top-end gaming GPU and one of the year’s most anticipated graphics cards.

Based on the company's vaunted Pascal architecture, the GeForce GTX 1080 Ti is packed with extreme gaming horsepower, with a massive 11GB frame buffer and 11 Gbps GDDR5X memory.

GeForce GTX 10-series graphics cards by NVIDIA have breakthrough gaming technologies and the ability to support VR experiences, delivering up to three times the performance of the previous generation’s graphics cards.

Other than being an incredibly powerful graphics card, the GeForce GTX 1080 Ti showcases the amazing capabilities of Nvidia’s Pascal architecture, which followed up the company's Maxwell architecture.

The NVIDIA Pascal can deliver a truly game-changing performance for those who love to take on other players or take their chances against a game's built-in AI. It combines innovative technology to produce sights and sounds for a gameplay experience that's brilliantly captivating.

Graphics cards powered by Pascal are known around the world for bringing efficient power with superior performance. Built using ultra-fast FinFET, the GeForce GTX 1080 Ti supports DirectX12. That means you can enjoy a smooth, fast gaming experience each time you power up your machine.

If you want to bring your gaming to the next level with an extraordinary graphics card, check out the Nvidia GeForce GTX 1080 Ti on eBay today. It can be just what you need to level up your gameplay.

Enjoy now and pay later with Afterpay at eBay. Up your gaming experience with the GTX 1080 computer graphics and video cards. We’ve got you covered with Afterpay, meaning you can get your GTX 1080 card online now and pay it off with 4 interest-free payments over 8 weeks.