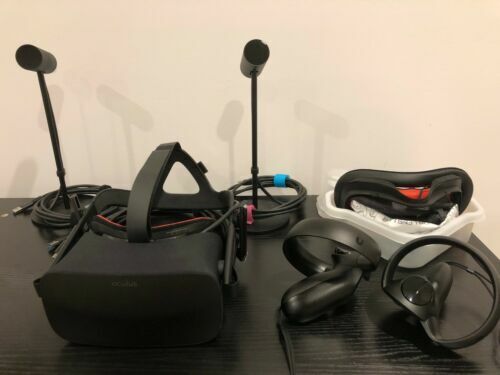 This virtual reality (VR) headset first hit the market in March of 2016. The consumer version (CV1) was an updated model of the Crescent Bay Prototype with several new and improved features, including separate eye displays and 360-degree tracking. Powered by connection to a desktop, production of the CV1 has since been discontinued and replaced by the Oculus Rift S, but the CV1 is still fully supported by software updates on the Windows 10 platform.

The advantage of the separate displays increases user comfort since the distance between the eyepieces can easily be adjusted using a slider on the bottom of the device. Those who need to wear glasses are also accommodated by the ability to modify the distance of the unit from the face. A 110-degree field of view improves peripheral vision, enhancing the user experience.

The Oculus Rift weighs just under 500 grams, and once it’s in place, the fit is snug. It can be used in either a standing or seated position, depending on your preference. Refreshing at around 90 times per second, it tracks your head position and simulates a spherical, 360-degree, 3D screen. It’s an experience that is difficult to explain in words.

An essential feature of the interaction with the virtual reality world is sound, so the Oculus Rift CV1 comes with a set of over-ear, surround sound earbuds and a built-in microphone. A bonus is that you can use your headphones if you prefer, or even purchase Oculus in-ear headphones that significantly improve the audio quality and hence, provide a more immersive experience.

There is a massive range of games available for the Oculus Rift CV1 VR Headset. There are three levels: comfortable – where you barely move your head, moderate – where you may need to avoid objects in a hurry, and intense – the ones that make your stomach churn.

Whatever your interest level, the Oculus Rift CV1 VR Headset is sure to capture your imagination and introduce you to a whole new VR world.