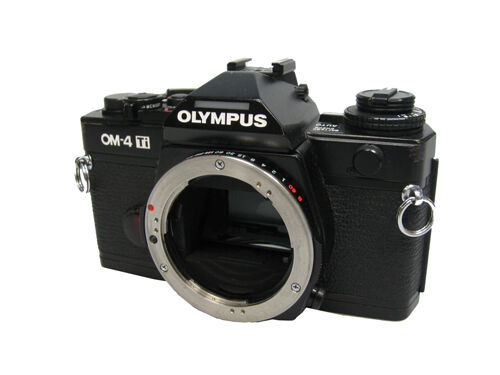 Today, Olympus is one of the world’s largest manufacturers of digital cameras. Before that, though, they made a wide range of high-quality film cameras, many of which are prized by film photographers to this day.

Film may have been largely supplanted by digital photography, but analogue photography still has dedicated fans. According to film enthusiasts, the limited number of shots per roll and the time taken to develop each one forces them to consider each shot and work more mindfully. While there are very few modern film cameras being made, the dominance of digital means that even extremely good, professional-grade film cameras are available at quite inexpensive prices.

Among all of the Olympus SLR film cameras, undoubtedly the most famous were the OM range. These 35mm film cameras made their debut in 1972 as Olympus’ first venture into the growing SLR market. OM SLR cameras were sold up until 2003 when they were discontinued as part of Olympus’ pivot to digital photography. In fact, this Olympus film camera line was so successful that Olympus’ modern DSLRs are called the OM-D series. The OM family of 35mm cameras ended up with quite a lot of members over its 30 year history. Single-digit cameras like the OM-1, OM-2, OM-3 and OM-4 were Olympus’ professional film cameras, while those with double-digit names like the OM-20 were aimed at amateurs. While the OM line was almost entirely manual focus, it also included the fully auto-focus OM-707 and the semi-autofocus OM-101.

While the OM series of Olympus film cameras tend to be the most popular among modern film fans, the company made a wide range of other film cameras. These included a wide range of compact 35mm cameras as well as rangefinder cameras, a type that is extremely rare in modern photography. Many of the old Olympus 35mm point-and-shoot cameras are still well-regarded by film fans today, such as the Olympus mju-ii, released in 1997.

The Olympus OM cameras were SLRs and could accommodate a wide variety of interchangeable lenses. They were equipped with the OM mount, for which Olympus made a large number of Zuiko lenses ranging from ultra-wide fisheyes to the enormous, four kilogram E-Zuiko Auto-T 1000mm f/11. Some of these lenses, like the OM Zuiko MC 100mm f/2.8 and the OM Zuiko 28mm f/2.0, are very highly regarded by modern photographers. OM Zuiko lenses can also be used with Olympus’ modern Four-Thirds system cameras by using an adapter.