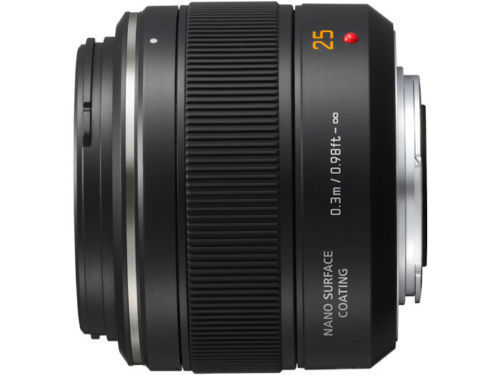 Panasonic makes G mount lenses for the Micro Four Thirds standard, which they launched in 2008 alongside fellow camera manufacturer Olympus. This standard is common across all of Panasonics Lumix G interchangeable lens cameras as well as some models from other manufacturers. Micro Four Thirds cameras have a crop factor of 2x compared to a full frame sensor. In other words, a 50 mm lens used with a Micro Four Thirds camera will have the equivalent field of view to a 100 mm lens on a full frame DSLR. This, combined with the overall smaller size of Micro Four Thirds cameras, allows a full setup to weigh comparatively little, and also allows for extremely long effective focal lengths without having to resort to using teleconverters. Panasonic has also collaborated with legendary camera manufacturer Leica to produce premium lenses for the G mount.

Panasonic Micro Four Thirds Camera Lenses can be extremely compact, and even more so if they contain no bulky zoom optics. Prime lenses might not be as versatile as zooms, but they can weigh less and boast much larger maximum apertures. The tiny Lumix G 14 mm F2.5 II ASPH weighs just 55 grams and measures around two centimetres long, making it very convenient for travel and street photography. Even long, fast super telephoto primes like the Leica DG Elmarit 200 mm F2.8 Power O.I.S. can be surprisingly compact when compared to their equivalents. Panasonic also takes full advantage of aperture size that primes can deliver. Lenses like the Leica DG Nocticron 42.5 mm F1.2 can deliver the short depth of field that portrait photographers dream of.