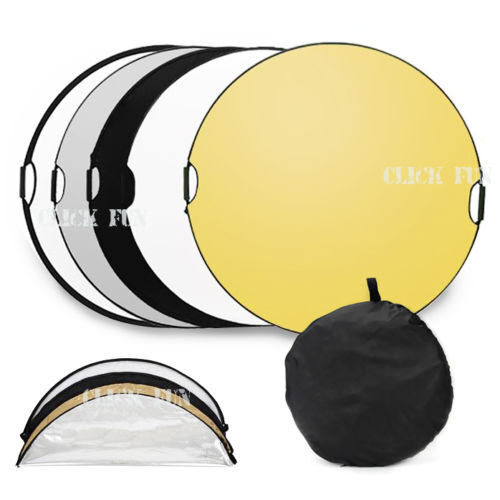 Studio reflectors are one of a portrait photographers most versatile tools. They can be used to create all kinds of lighting effects on a subject and are equally effective for flash and natural light photography.

Photography is the art of capturing light. The way in which the light falls on a subject can make a huge difference to a photographs emotional impact. Reflectors give photographers a way to manipulate the lighting of a scene by bouncing light from another source, and they work equally well with natural sunlight and artificial flashes. Portrait photographers love reflectors for their ability to balance out backlighting and remove unwanted shadows on the face, but they also see a lot of use in product photography. They are also quite inexpensive as well as versatile, making them a great first lighting modifier for new photographers.

Reflectors arent only for bouncing light, they can also modify it in other ways depending on their colour and surface material. White photographic reflectors are the most common type as they soften the light without altering its colour balance at all. Silver reflectors are also very popular as their metallic silver surface reflects more light than a white surface, making them good for achieving stronger lighting in the shadows. Gold reflectors are also more reflective than white reflectors, but unlike silver they create a strong warm colour cast. Reflectors are often three-in-one designs that include white, silver and gold reflectors. Five-in-one reflectors add a black anti-reflector, or flag, that can be used to block out light from certain angles and a clear diffusion panel that softens light passing through it.

Collapsible studio reflectors are usually circular and come in different sizes. The reflective panel is stretched over a flexible outer ring, allowing you to bend them to create different lighting effects. On the downside, holding a reflector in one hand and working the camera with the other is fiddly, and delegating reflector duties to an assistant isnt always possible. Frame and panel reflectors are more rigid and are designed to attach to free-standing frames, making it easier to set up your lighting and then take your pictures. Collapsible reflectors can also be used with stands and reflector arms though.

Because lighting is so essential for photography, photo equipment manufacturers have developed a huge range of light modifiers to choose from. Umbrellas and softboxes are both used to diffuse light from a flash in order to soften the shadows. Like reflectors, reflective umbrellas come in white, gold and silver to create different lighting effect, and many photographers also get a lot of use out of translucent shoot-through umbrellas. If you want harder light rather than softer light, a grid or a snoot can be used to create a tightly-focused beam that is great for taking dramatic hard light portraits.