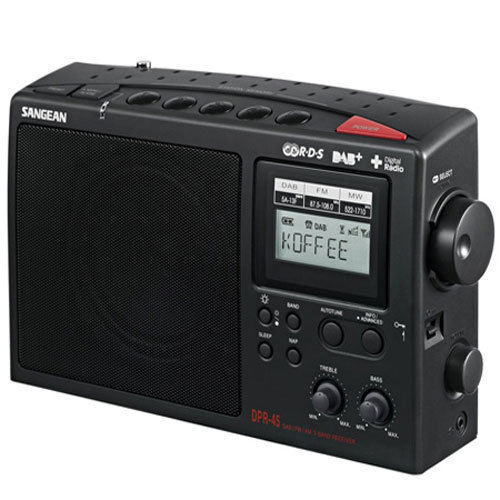 One of the worlds largest and most established manufacturers of portable AM/FM radios, Sangean products are renowned for their superior sound quality and ease of use. Theyre a world leader in new Digital Radio (DAB+ Digital Audio Broadcast) technology with a wide range of their receivers now on the market in Australia.

Stay Tuned in While on the Move

Sangean portable AM/FM radios allow you to listen to your favourite station while on the move with portable radios sized to slip into your pocket. They feature an in-built telescopic antenna and rechargeable lithium-polymer battery, as well as an auxiliary input for iPod and MP3 playback.

Radios of the Future

Like digital televisions have taken over from analogue TVs, digital radio is now making its mark, offering a significant improvement in quality from FM and AM radio. Sangean DAB portable AM/FM radios harness this technology to filter transmissions, offering a clear and clean signal for a superior sound experience. Theyre also far easier to tune with stations easily selected from a menu, rather than having to fiddle with a dial to find a good reception.

Sangean DAB portable AM/FM radios also feature screens that display information, such as which song is playing and the station to which you are listening. Take advantage of the simultaneous news feeds, album art, and even phone numbers for businesses being advertised on the station.

In addition to classic black and white portable AM/FM radios, Sangean also designs emergency alert models in bright yellow so they can be easily seen. This rugged Sangean portable AM/FM radio ensures you can listen to music, news, and radio programmes no matter where you are working. They can be charged by solar power, USB, or a hand crank and the emergency siren will work even if the device is switched off.