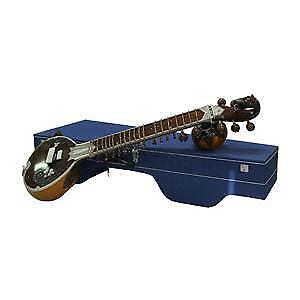 The sound of the sitar is associated around the world with India. Its unique tones have inspired musicians for centuries, in Indian classical music and in other genres.

The sitar is an Indian instrument with a long history. While stories of its origins vary, it most likely originated in the 18th century in northern India as a descendant of similar Persian instruments. Some theories also point to earlier Indian instruments like the veena as precursors to the sitar. The sitar is one of the key melodic instruments in Indian classical music and one of its most recognisable sounds, particularly to Western listeners. Outside India, the sitar was popularised in the 20th century by musician and composer Ravi Shankar, who launched Indian classical music to a global audience during the 1950s and 1960s. He collaborated extensively with Western musicians from various genres, including classical violinist Yehudi Menuhin and George Harrison of the Beatles.

A sitar is a stringed instrument from the lute family. It consists of a pear-shaped body, traditionally made from a calabash gourd, and a long hollow fretted neck, and may also have a secondary resonating chamber at the head. The number of strings varies. A Ravi Shankar style sitar has seven playing strings, four of which are used to play melodies, and a further 13 sympathetic strings. The Vilayat Khan style has six playing strings of which only two are used to play the melody and 11 sympathetic strings, and does not include a secondary resonator. Tuning also differs between the two styles.

Like other instruments, the sitar has evolved in form since it first originated. Classical sitars have wooden fretboards and necks often made from toon wood, gourd bodies and bone or horn bridges. Modern designs may replace the gourd with more wood or the bone with plastic, and are sometimes even made out of more exotic materials like carbon fibre. The sitar is no longer purely an acoustic instrument, either. Electric sitars and acoustic-electric sitars are both available from various manufacturers.

The sitar is far from being the only stringed instrument from India, although it is the one best known elsewhere. Similar Indian classical instruments include the surbahar, which is essentially a bass sitar, and the wide-necked sarod which occupies a similar place to the sitar in northern Indian music but features a fretless fingerboard that makes it possible to slide notes.