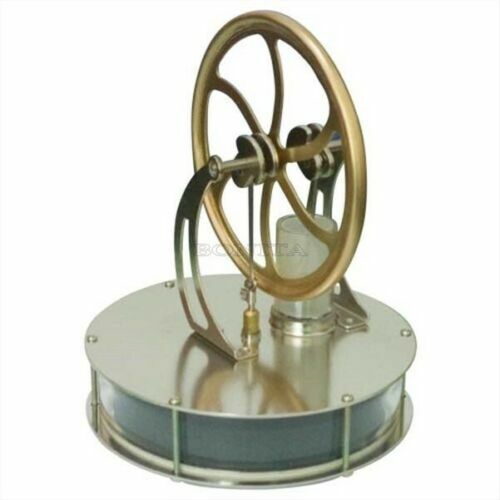 Stirling engines are a type of engine that was conceived not long after the steam engine. It was dreamed up by Robert Stirling, a Scottish minister who created the first practical example of a closed-cycle air engine, which is what a Stirling engine is. The Stirling engine uses the same basic principle as a steam engine; that gas expands as it heats up, and that generates air displacement, which is harnessed into mechanical power. It was originally intended as a rival to steam, but only really ended up being used in small-scale domestic use. These days, you can buy models of the Stirling engine to display and demonstrate its working principles to children, students, and guests.

Most of these display-and-demonstrate models are static installations that simply drive a wheel round and round to demonstrate their workings, but a few are mounted on wheeled platforms and can be made to move forward. This is partially practical; you need less space to show how a Stirling engine works if said engine isn’t trying to drive itself off the table, but it’s also a reflection of the issue the engine ran into when it was first invented. The Stirling engine has a lower power-to-weight ratio, which means it’s far more suitable when it doesn’t also have to move its own weight around. Though it was far more efficient than the steam engine in terms of raw-power output, having that added burden would put it well behind again.

With the rising cost of fossil fuels, both in terms of the economy and the environment, the Stirling engine has made a bit of a comeback. It has been integrated in several prototypes for more sustainable, easily sourced energy because it’s basic principles will operate with any heat source. Moreover, the Stirling engine is simple enough to be easily reproduced with some basic metal-working equipment. Either way, you might be interested in steam powered toys as well. These sorts of items can be relaxing to look at as they chug away, and the steady rhythm of their workings become hypnotic. If you tend to agree, you can also check out other stress relief toys.