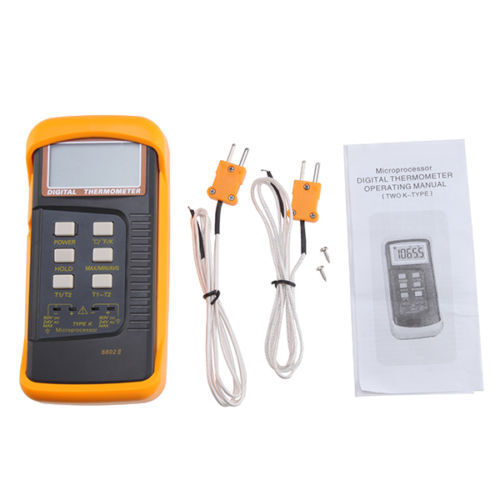 A Thermocouple is a temperature sensing element used in many different digital thermometers. Unlike a traditional digital outdoor thermometer a thermocouple based system can be accurate over an extremely wide range of temperatures making them very useful for industrial and scientific purposes. Thermocouples also have the advantage of being among the simplest sensor elements available, so people often use them for test probes.

How a Thermocouple Works

A standard thermocouple consists of two wires of dissimilar metals welded together. Because each metal has different thermal and electrical properties this results in the wire generating a small but measurable current. All you have to do to determine the temperature is put a meter on the wire and measure the current. Depending on the metals involved and the sheathing used, a thermocouple can measure temperatures from as low as -270 degrees C to as high as 1200 degrees C.

Unlike a thermocouple, a thermistor is actually an electronic component. Its essentially a temperature-sensitive resistor that works when you pass a current through it. Changes in temperature cause changes in resistance, which you can read read from the appropriate meter. Thermistors are commonly used in conjunction with sensor ICs. The big advantage of a thermistor is its accuracy over a narrow range and stronger signal, the latter making it easier to get a measurement than with a thermocouple.

Using a thermocouple is simple. Just apply the probe and take a reading off the LCD screen. Most thermocouples are in digital thermometers, some with humidity sensors, and the internal circuitry does all the hard work for you.