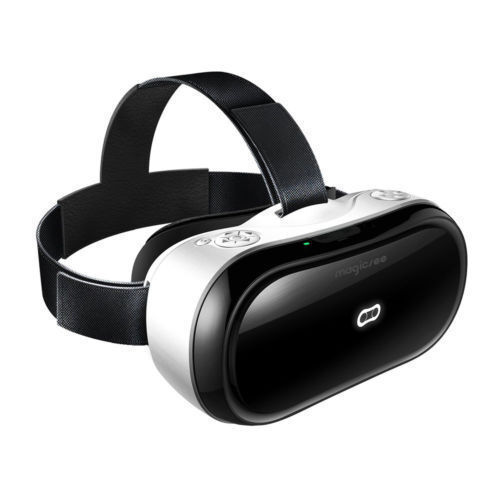 If you’re wanting to escape reality for awhile, look no further than virtual reality headsets. A variety of different types and brands are available from HTC Vive to Oculus Rift to Playstation VR to Samsung Gear VR and even Google Cardboard. No matter your budget and your pre-existing technology, there’s a virtual reality headset to suit your needs and give you a new and vibrant virtual experience.

The stand-out point for HTC Vive VR systems is their “room-scale” tracking technology which makes use of headsets, base stations and object trackers. This allows users to set up an area of up to 15 x 15 feet that becomes a virtual workspace. Software in the VR headset can map real-world objects and project them into virtual space as walls or barriers to prevent collision, and object tracking devices can be added to any small object to integrate it into the virtual system. For example, attaching a tracker to a normal ping-pong paddle would allow a user to play virtual ping-pong with their own paddle.

Oculus Rift headsets are slightly less expensive and less complex than Vive systems and function primarily as peripherals to PCs. They generally consist of a headset and controller, though many different audio options are available for full immersion.

Playstation VR headsets are sold by Sony for use with the Playstation 4. The Playstation 4 has several VR-enabled games and in some cases supports multiplayer with one player wearing the VR headset and others using a television attached to the same Playstation.

Samsung Gear VR headsets consist of a headset that is mainly a mount for a smartphone, with motion-tracking onboard hardware and a sync system that allows the use of controllers. It has the benefits of being quite cheap in comparison to many other VR options but both requires and is limited by the smartphone it employs.

Google Cardboard headsets are budget-friendly and easy to use. They are similar to a Samsung Gear headset but even more cut down, consisting of a foldable cardboard headset with lenses and a small slider as a controller. While again limited by its use of a smartphone, the Google Cardboard is a simple, cheap and straightforward option for people who may wish to sample VR before buying a more expensive system.