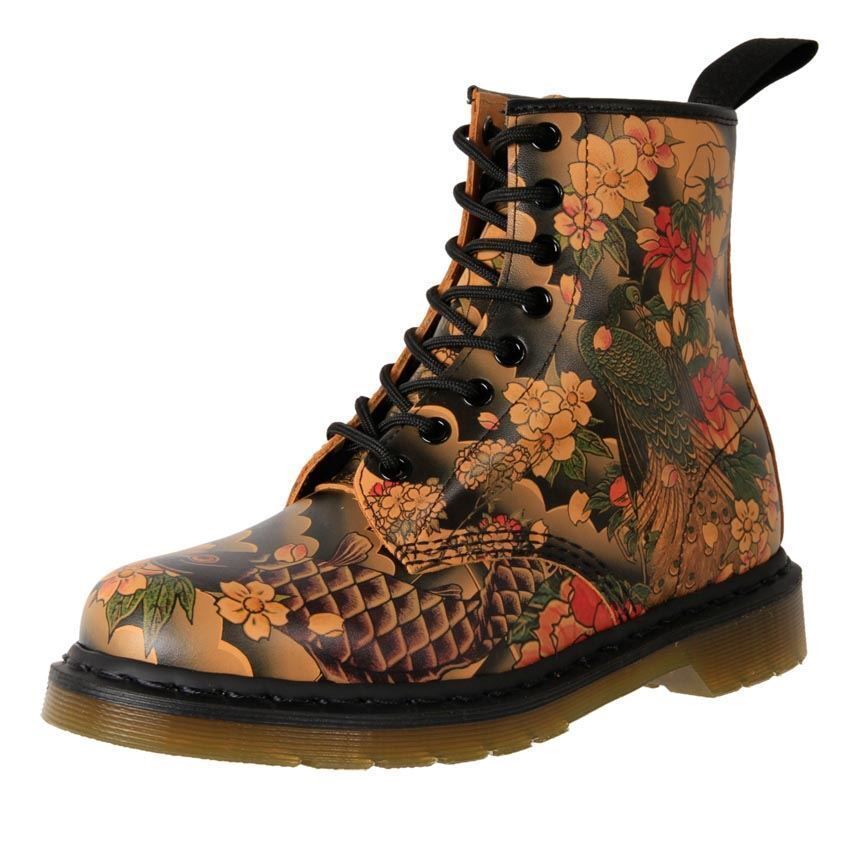 Dr. Martens is a British footwear company first gained popularity in the early 1960s. You can distinguish these shoes by their visible yellow stitching, air cushioned soles, shape and construction. The air cushioned soles originally used discarded rubber after World War II. Diverse demographics of people have been wearing them since, including punk rockers, housewives, new wave musicians, and the grunge music subculture. Dr. Martens womens boots are also widely popular due to their quality construction.

The 1460 boot is one of the most iconic styles and an original design from 1960. It remains a best selling boot, and the shoe that most people envision when they think of Dr. Martens, or Docs. Other popular styles include 1414, a taller lace-up boot, 2976, a slip-on bootie, and the Cynthia Temperley, which is a chukka style shoe. Although most styles are relatively utilitarian, some Docs veer more toward funky or classic styles.

The patented air soles, also known as Bouncing Soles, are a trademark of all Dr. Martens shoes. They are rubber and have patented AirWair soles, which resist water and slipping. While the upper is usually leather, Dr. Martens now produces vegan alternatives of many of their popular styles, including the 1460 boot. It uses synthetic materials that replicate the look and durability of leather. Other styles also have uppers using canvas and cotton materials.

Dr. Martens have embraced expression through fashion ever since youthful subcultures adopted them. Many of their boots are in colourful and holographic materials and patterns, coming in unique styles. Dr. Martens sells boots that range from ankle to knee in height. Dr. Martens knee-high boots for women, like the Chianna boot, are popular in fall fashion, as they are a horseback riding style boot. The 1914 has a classic Docs style, but laces up higher. It is an example of Dr. Martens mid-calf womens boots.

Most Dr. Martens womens boots have a 3.15 cm sole, but there are both platform and heeled options. The Persephone style has a chunky heel and a lace-up upper, while the Magdalena is very similar but has a slip-on upper. The Molly Patent style has a platform base, similar to creeper-style shoes popular in the 1990s.